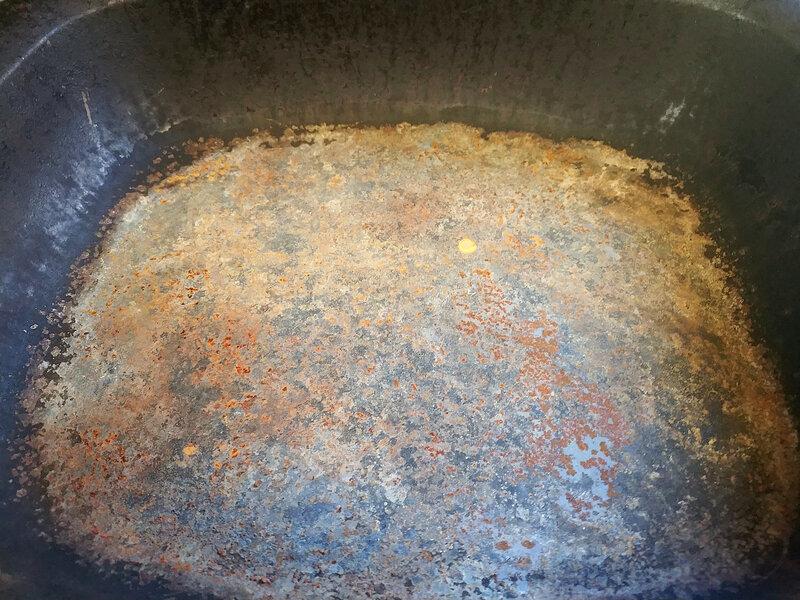 It's so easily done: you cook a nice roast dinner and someone "helps" by cleaning your roasting tray.

You find out, far too late, that they did this by putting it in the dishwasher, so the next time you see your trusty roasting pan all the seasoning's been stripped and it's a rusty mess

Unless you're partial to added rust in your food, this is an unmitigated disaster - anything cooked in the pan is going to stick and your roast spuds will pull apart when you try and take them out of the pan.

It is, however a recoverable disaster - the pan can be re-seasoned using much the same method as you'd use to Season cast-iron cookware.

Essentially, what it involves is coating the tray in (cooking) oil, and then holding that oil at it's smoke point for an extended period so that it leaves a protective residue on the base of the pan.

In this post, I'm going to re-season what was my best roasting tray. The same process can be used for cast-iron pans too.

Before the pan can be seasoned, we need to strip it back to the metal - we don't want the seasoning sticking to something that might detach itself from the metal, so we need to remove any rust or bits of the original seasoning/non-stick. 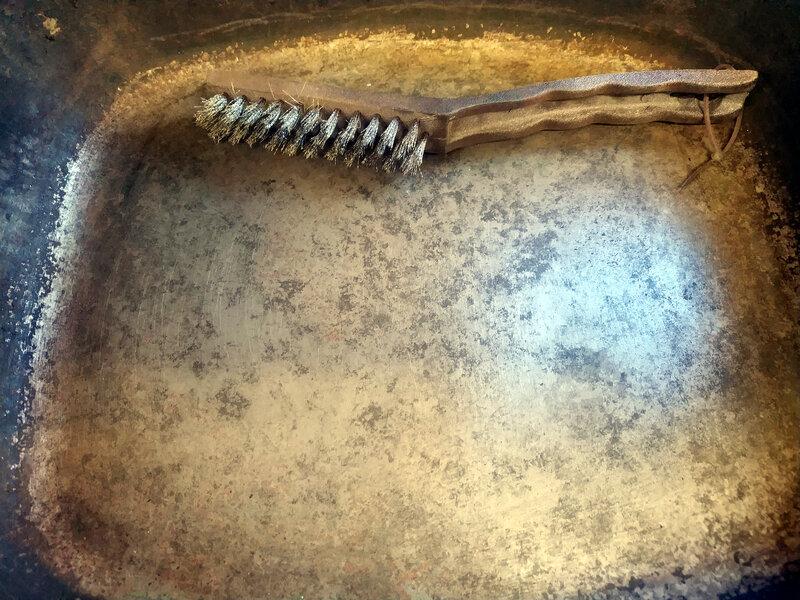 That's got the rust off, but we can still see various marks on the surface of the metal.

Put some sandpaper onto an oscillating tool and go at it 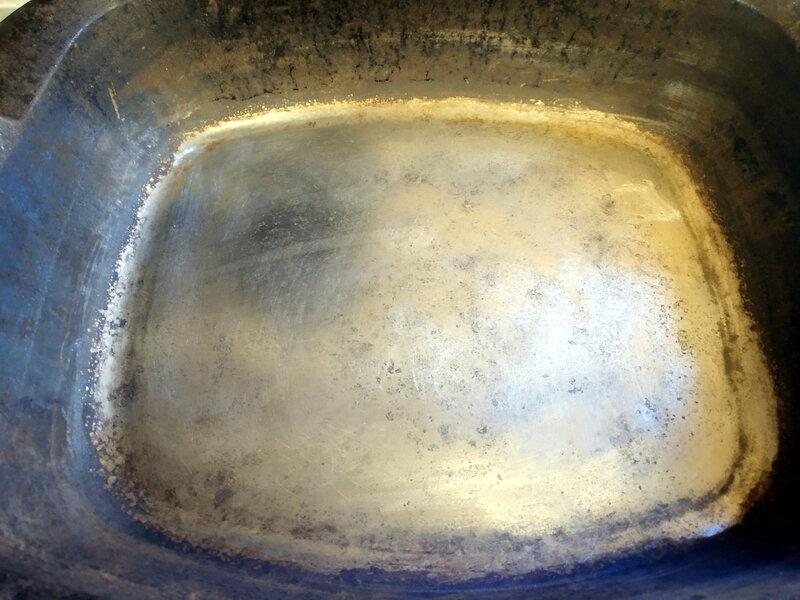 If you used a fine sandpaper, you might want to go over again with the wire brush - you don't want too polished a surface as the seasoning will need something to grab onto.

I've only done the base because the sides have largely survived their dishwasher trip and don't (normally) touch the food anyway.

Use a workshop hoover to get the worst of the dust away, and then take the pan back to the kitchen for a nice soapy bath 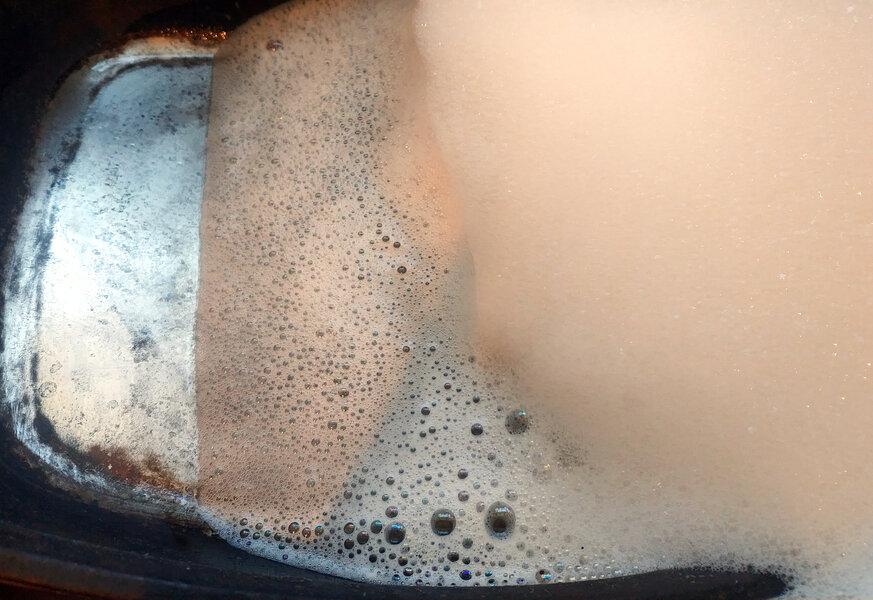 Give it a thorough wash to ensure there's no metal dust left on it, then rinse it off and dry with a towel

You'll want to pre-heat the oven before the next step, the temperature you need will depend on the type of oil you're using for seasoning (they have different smoke points)

Set the oven pre-warming to the necessary temperature.

Next, we need to ensure the pan is faultlessly dry.

If you're patient, you can put it in the oven (though it'll also make handling harder later), if you're impatient (or don't fancy burns) it can be dried on the hob (guess what I'm doing).

Set the hob to a high heat, and place the tray over for a couple of seconds 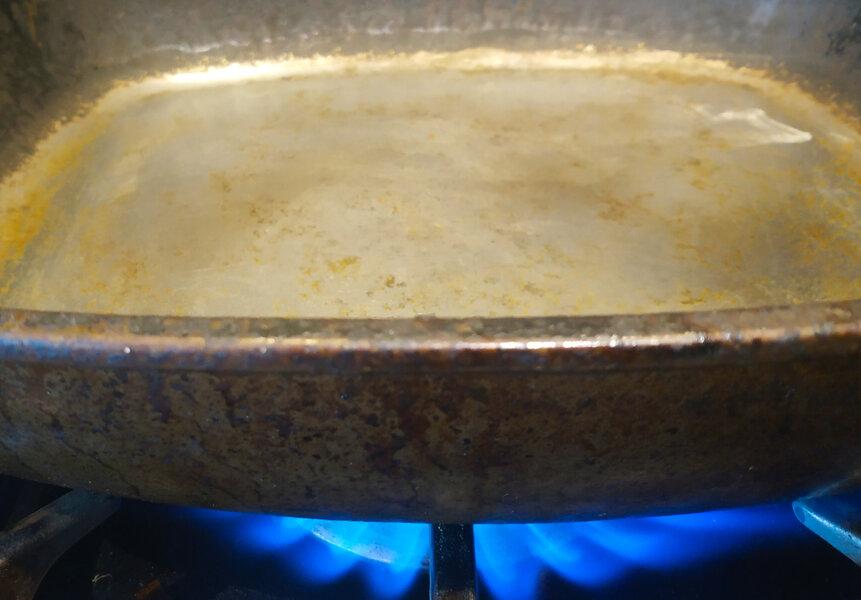 You'll likely generate a bit of smoke from bottom of the pan, and you might slightly burnish the metal. If the pan tries to warp, gently push it back.

Move the pan around until you're sure any moisture has evaporated off.

Now that your pan is dry, put half a tablespoon of oil into it. 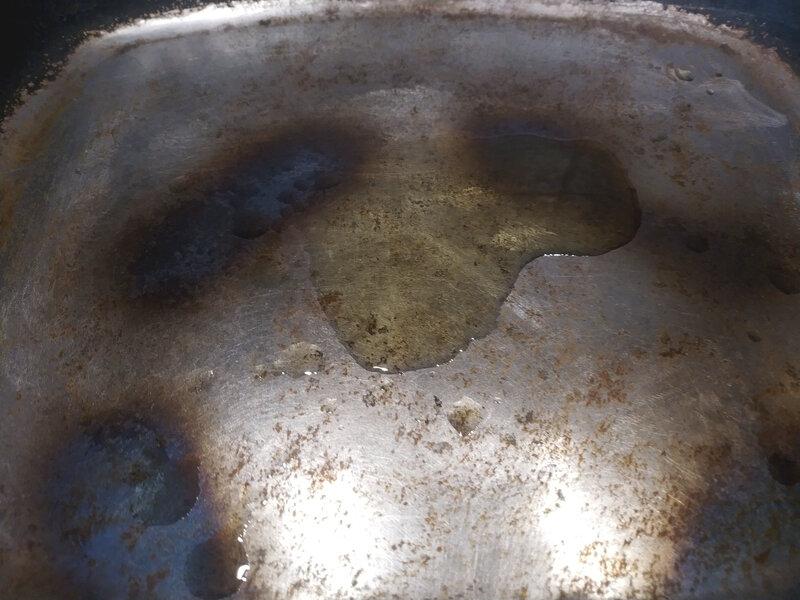 Then use a paper towel to rub it around evenly. You're aiming to spread it so well that the pan no longer looks greasy (otherwise you'll get a greasy stickiness, which is no good) 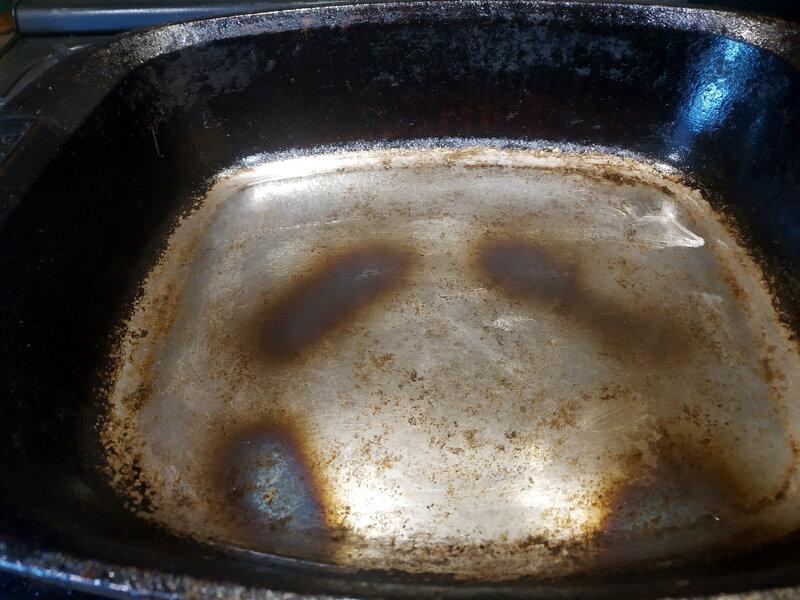 Line a baking tray with foil and then put the roasting tray upside down on it (we season upside down so that the oil cannot pool inside the pan when it warms). 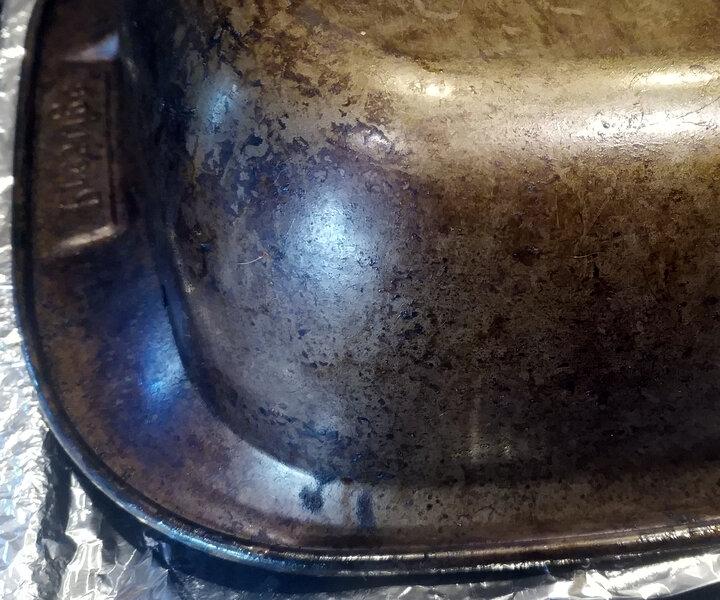 Put into the oven for around 1 hour.

When the time is up, turn the oven off but leave the oven door closed.

For the seasoning to stick properly, it and the metal need to start to cool naturally rather than suddenly being pulled out into room temperature. Leave the tray to cool in the oven for at least 15 minutes.

After it's had time to sit and cool, take the pan out and turn it over.

You may find it's developed a bubbly effect like this: 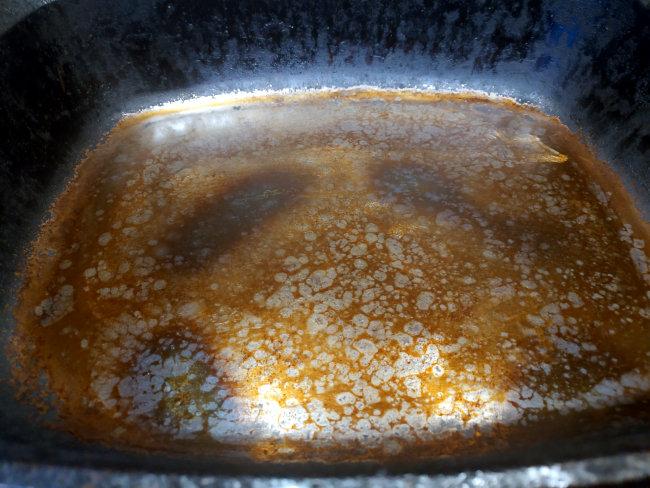 That's the result of oil running off one section onto another and isn't necessarily a major issue.

You can either use the pan for a roast now, or you can give it some additional coats to build up the protective layer.

The next roast you cook will add another layer of protection, but you may want to put a little more oil in than usual to help with that process.

Good cookware is expensive and needs to be looked after properly.

Roasting pans (and cast-iron cookware, and Woks etc) should not be washed in a dishwasher. The combination of high temperature and harsh detergent strips the pans of the thing that makes them good at their job.

You want your tray to retain it's protective layer, but you obviously don't want old bits of food stuck to it.

Pans can usually safely be scrubbed with a soft scourer, if something a bit more aggressive is needed, then adding a bit of salt into the pan before scrubbing provides some additional grab.

It may seem easier to chuck them in the dishwasher but in the end you'll only end up scrubbing with a wire-brush instead (or, of course, you might find that someone else had to scrub and has put something of yours in the dishwasher in an act of petty but satisfying revenge).