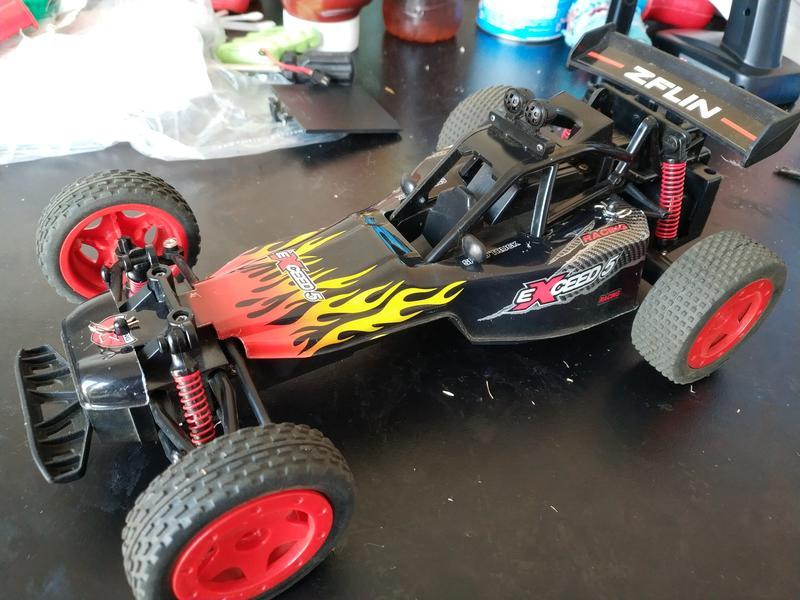 Just like in a real car, the gearbox is pretty well buried and we're going to have to remove a few things to get at it. There are more than a few screws so you're going to want to be sat at a table or a workbench. 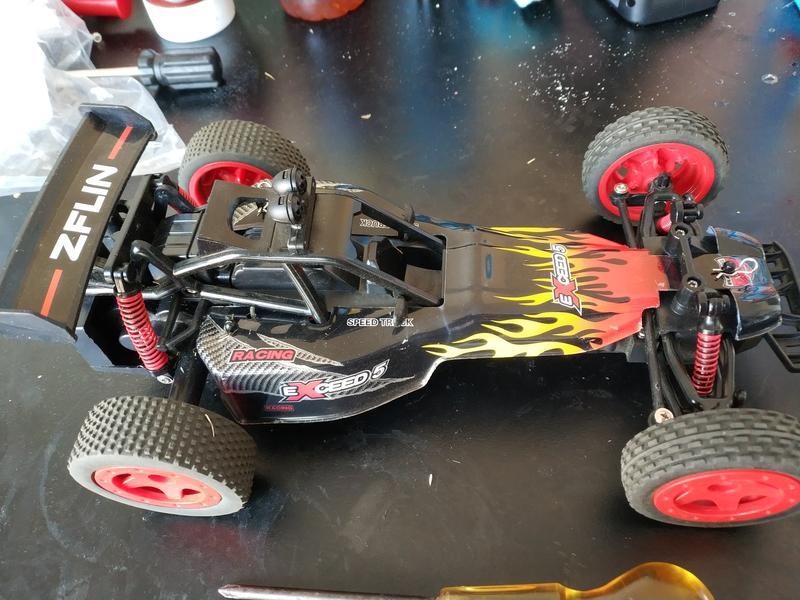 To perform this repair, you will need to the following

Stripping the car down took about 15 minutes, though I was stopping to take pictures as I went.

Dismantling the car involves removing a variety of screws. It's time consuming and requires a little care, but is otherwise pretty straightforward.

First we're going to remove the rear wheels. There's an axle screw in the center, and then they just slide off the axle 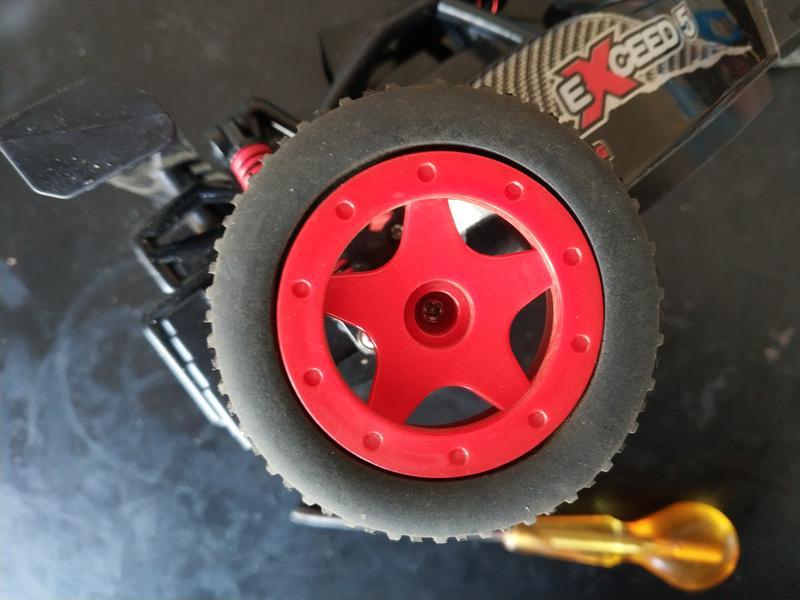 Next, the rear shock absorbers. Simply unclip the top from the chassis and carefully remove the spring and the center strut, the lower mount can stay in place 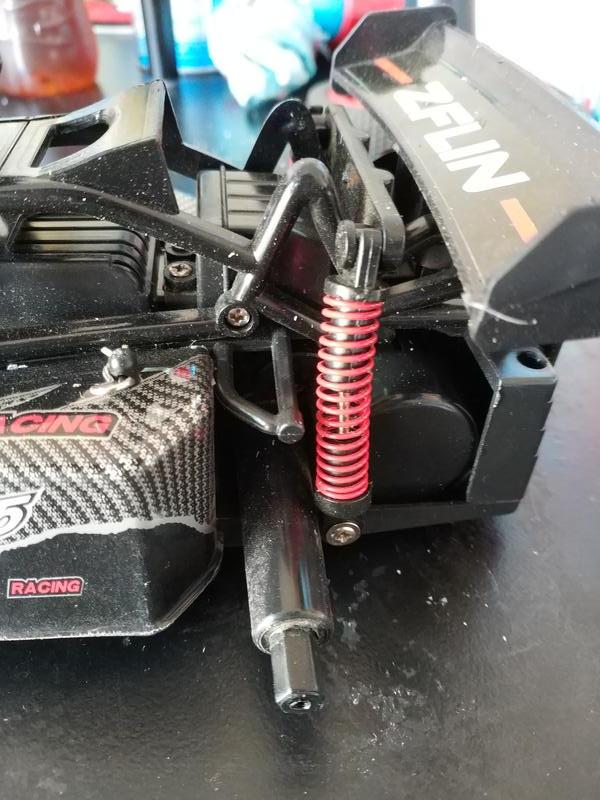 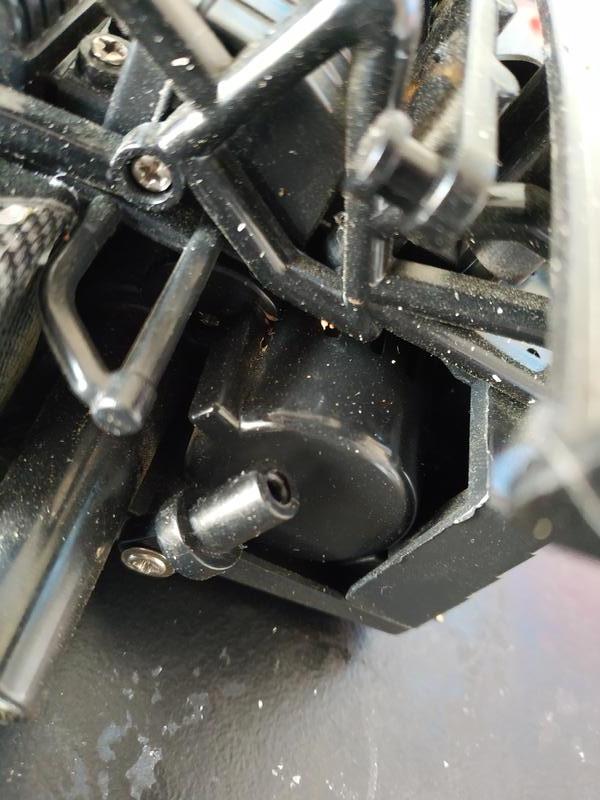 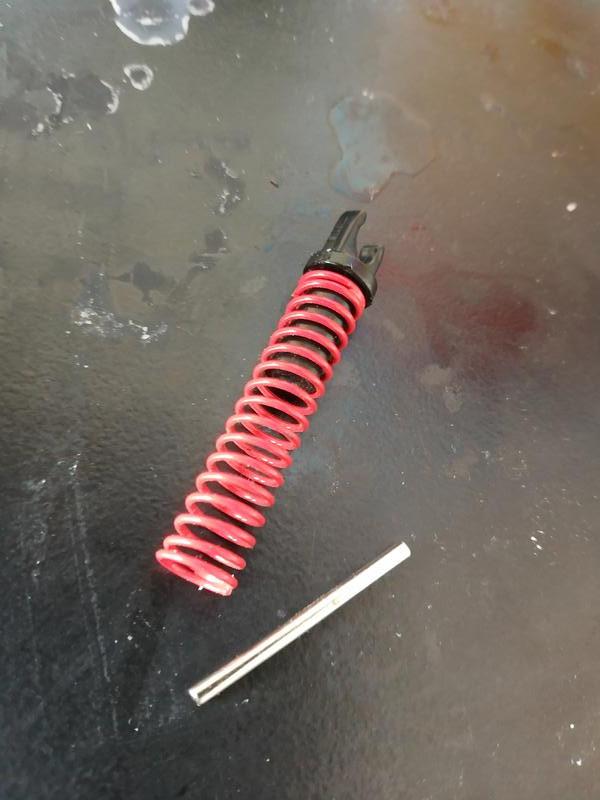 There's a push clip holding the cowling down at the nose, remove this. Next, we need to disconnect the front suspension and remove the mount to allow the cowling to be removed. As with the rear, unclip the top of each of the shock absorbers and remove them and the spring (the center strut seems to be better affixed in the front, so will likely stay in place): 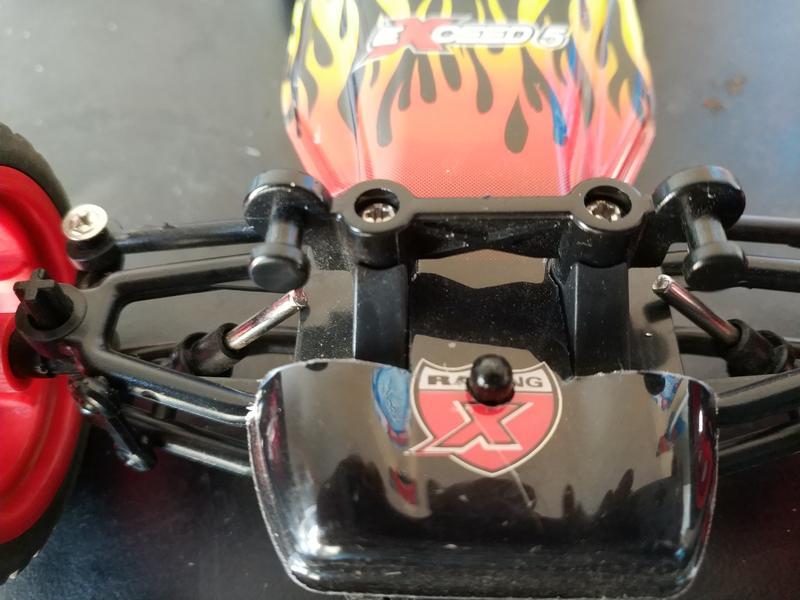 Unscrew the two screws holding the suspension mount in place and remove. The front end is now sufficiently dissassembled 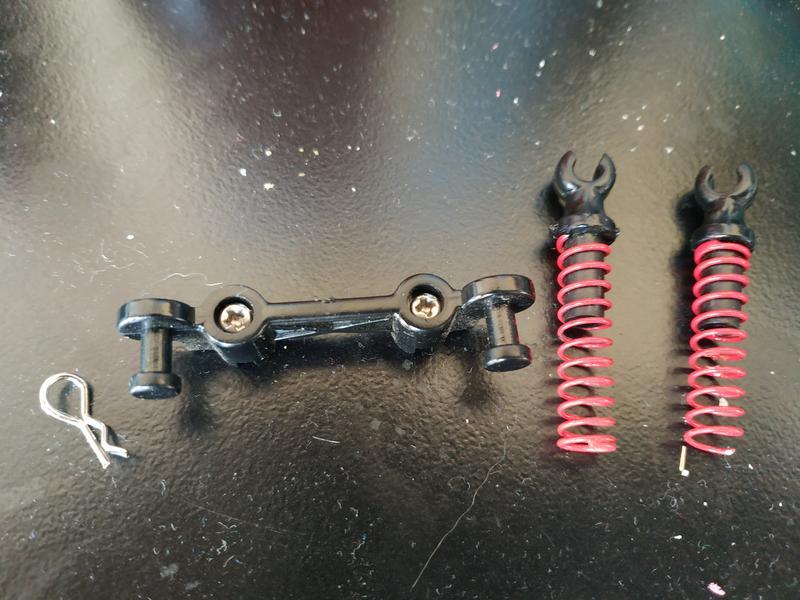 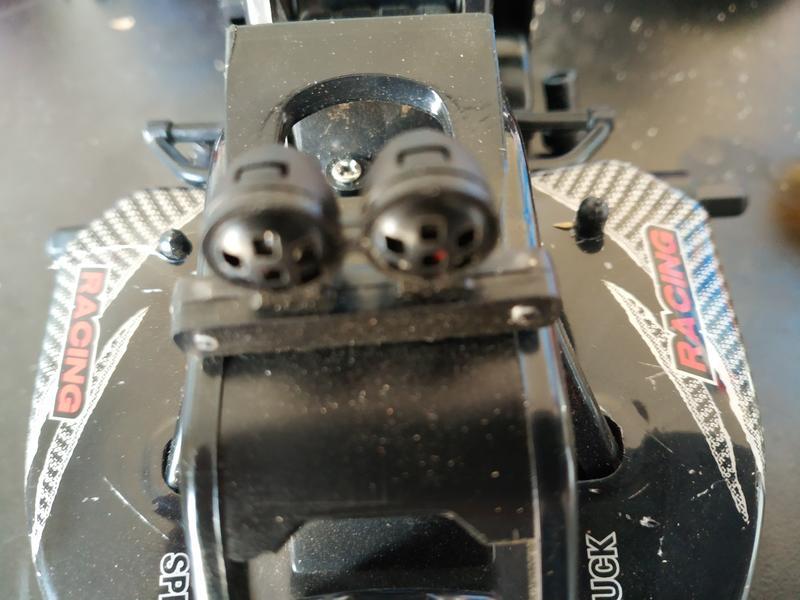 You should now be able to remove the cowling. You need to lift it up over the securing nipples, and bend it out slightly to get it clear of the wingmirrors. It takes a bit of wiggling and care, but it will come off. 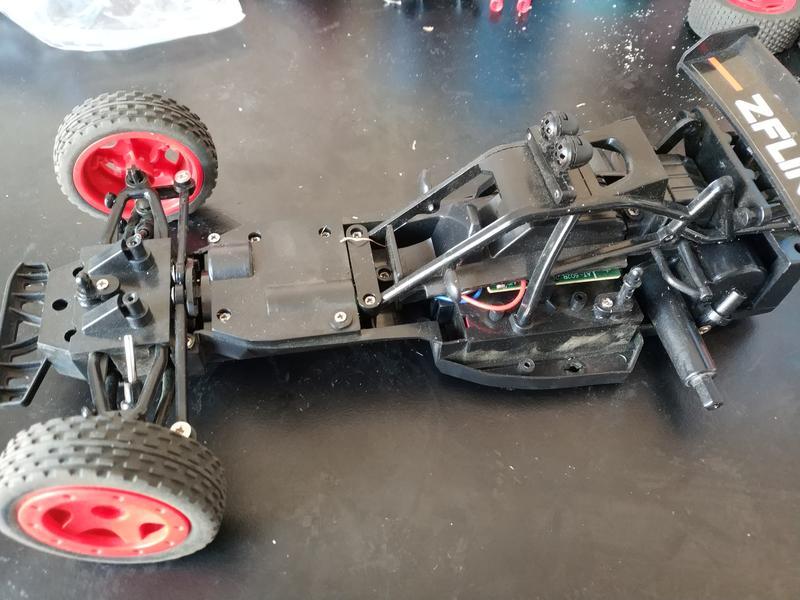 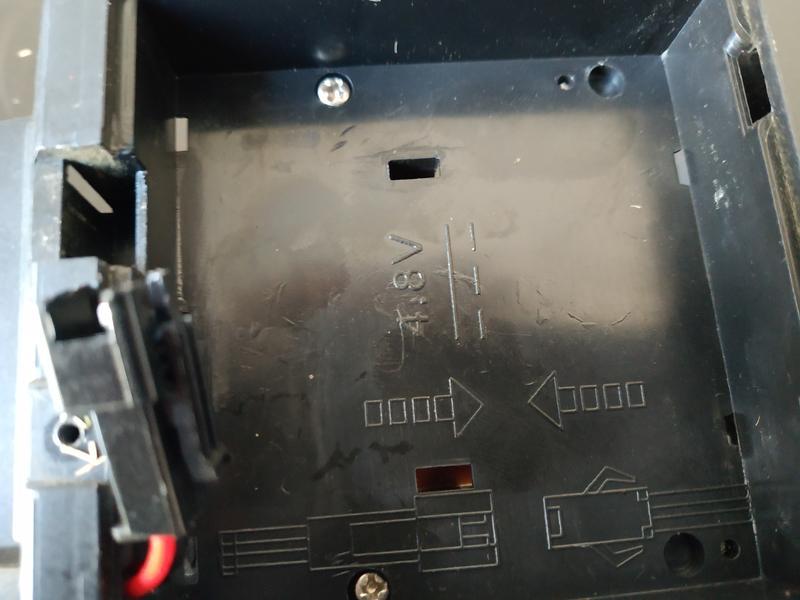 Next, back on top, at the front of the windscreen area are two screws, these should also be slackened and then completely removed 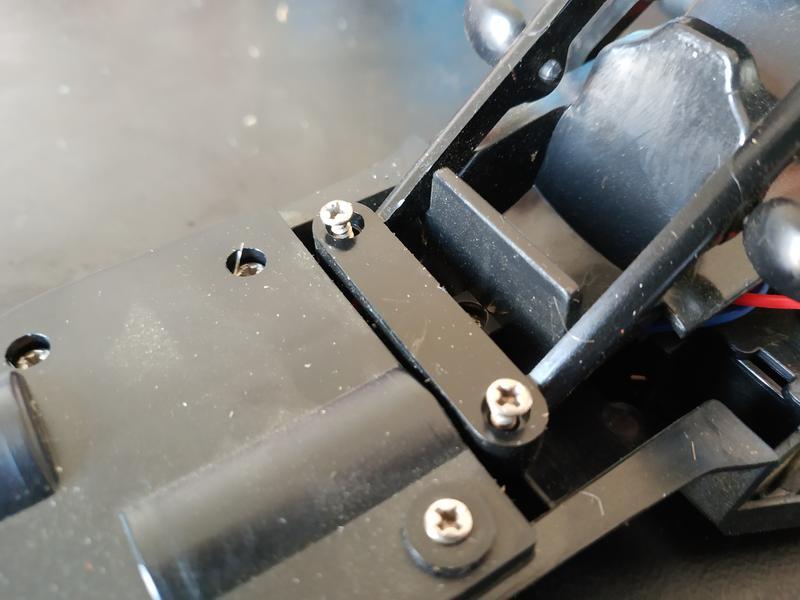 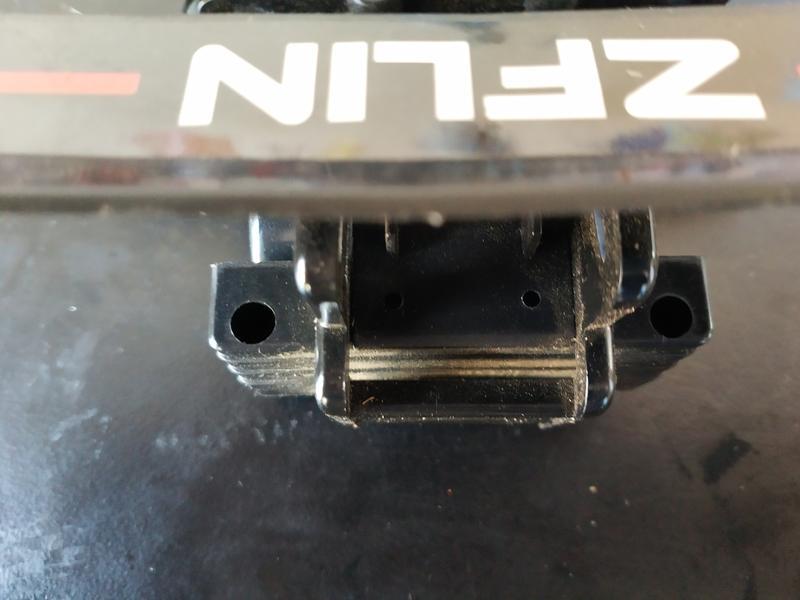 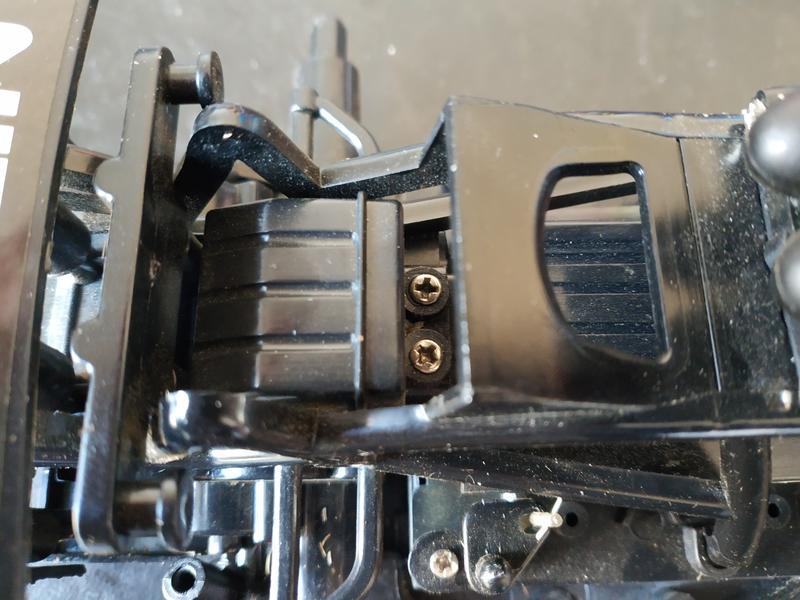 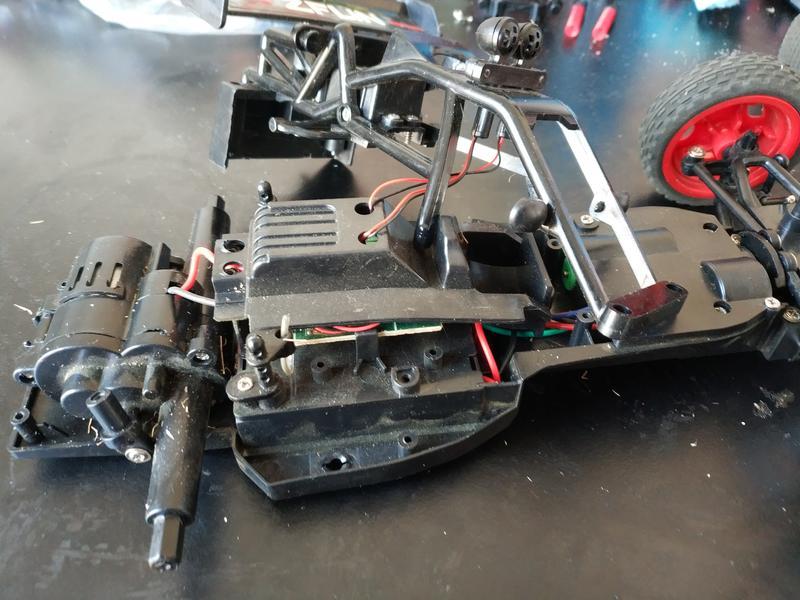 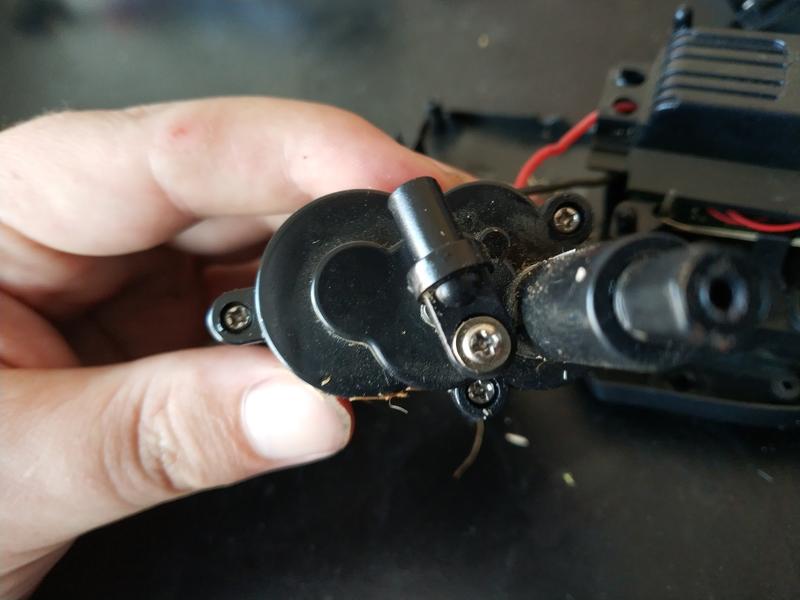 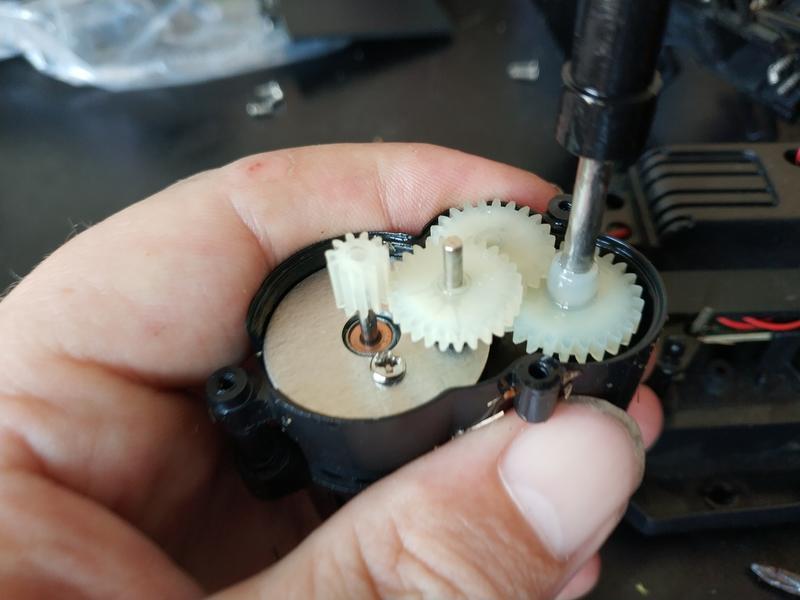 If you look closely at the gear on the end of the motor, you can see the cause of the issue.

It's worked its way outward, and the motor's shaft is now only just inside it. This means there's very little friction (particularly as the fine oil in the gearbox will have worked it's way into it.

This allows it to slip very easily when under load. The wheels will turn when you're holding the car up, but once it has to account for the weight of the car it'll just sit and turn inside the sprocket rather than generating any movement. On other cars, there'd be a screw or a pin that goes into the shaft to prevent this, but the manufacturer hasn't done that (for whatever reason).

The first time I stripped this gearbox down, I tried just pushing the sprocket back down. This fixed things for about five minutes, so a more permanent route is needed.

Carefully remove the other gears and set them to one side. Then gently pull the cog off the end of the motor's shaft.

What we're going to do, is use some glue to help fix the sprocket to the shaft. It doesn't matter too much what glue you use, but it needs to strong. Superglue probably isn't an option though - you want the glue to be quite thick. Not only does it have to fill any gaps, but you want to be sure that it's not going to run down the shaft into the motor.

I used some Epoxy Resin - primarily because it was already sat on the bench in front of me.

Clean the shaft with a cotton bud to get any remnants of oil off it, and blow through the sprocket to clear any drips in there.

Remove the end from a cotton bud and use it to spread a little glue over one end of the cog, and then some along the first 1/4 of the motors shaft. 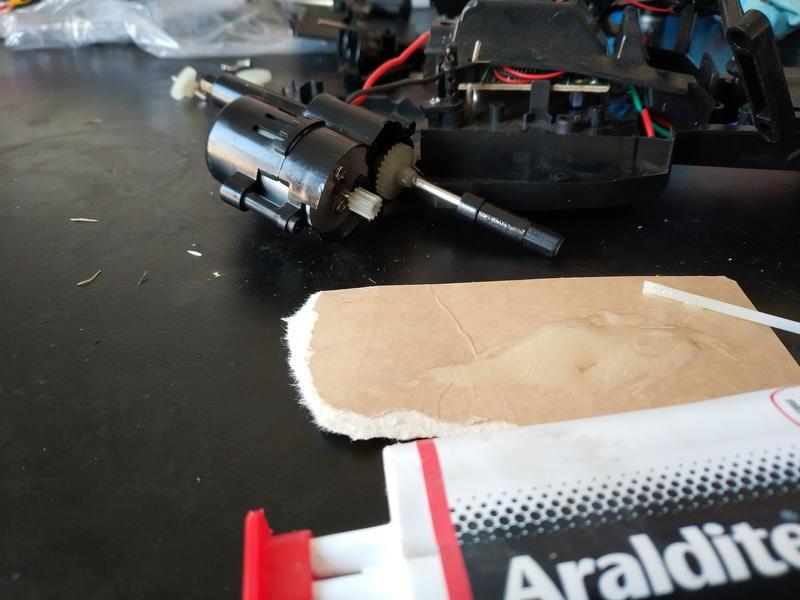 Now go and do something else for a while - long enough for the glue to set. If you try to rush ahead, you risk blobs of glue being thrown off into the gearbox, which would likely be pretty fatal.

Once the glue's had long enough, carefully reinstall the other gears - start with the upper right cog, and then install the one that links that to the motor.

Slide the end back onto the gearbox (you might want to peer from underneath to make sure you're aligning the gear's shafts correctly), and reinstall the retaining screws. 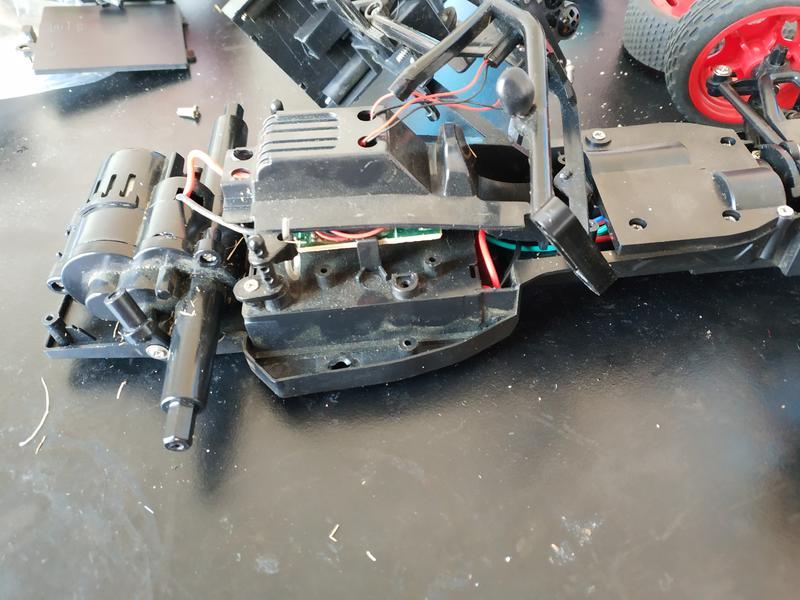 Re-assembly, for the most part, is achieved by reversing the dismantling procedure. 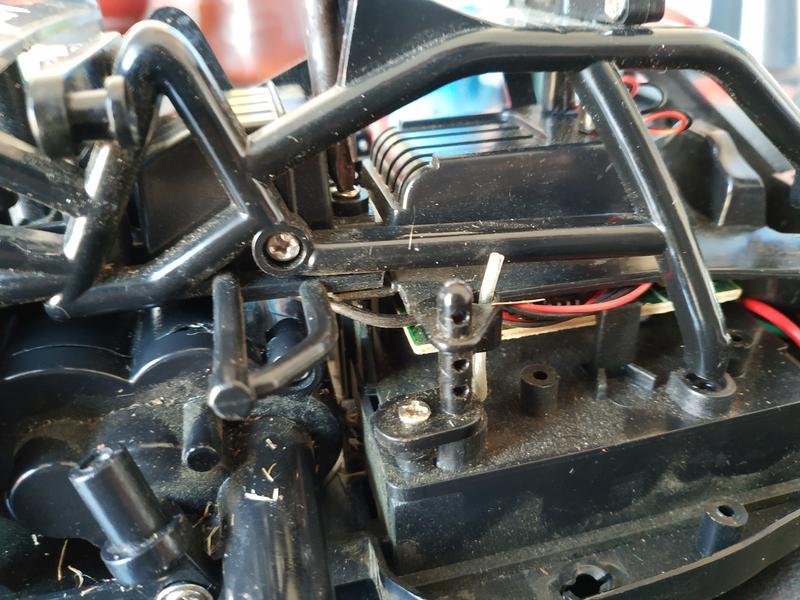 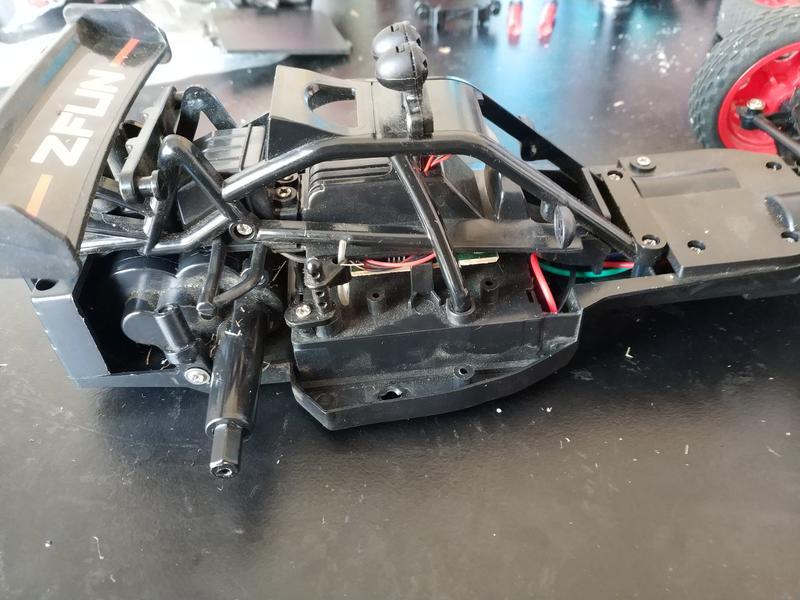 Now the cowling needs to do back on.  Getting the front in place is easy, but getting it back around the sides (remember you need it under the wingmirrors, over the nipples whilst allowing the aerial cable through) is a little more fiddly. You need to approach is as if you don't care too much if it gets torn - it will go on (without damage) but you may need to pull it outwards a little more than you initially feel comfortable with. 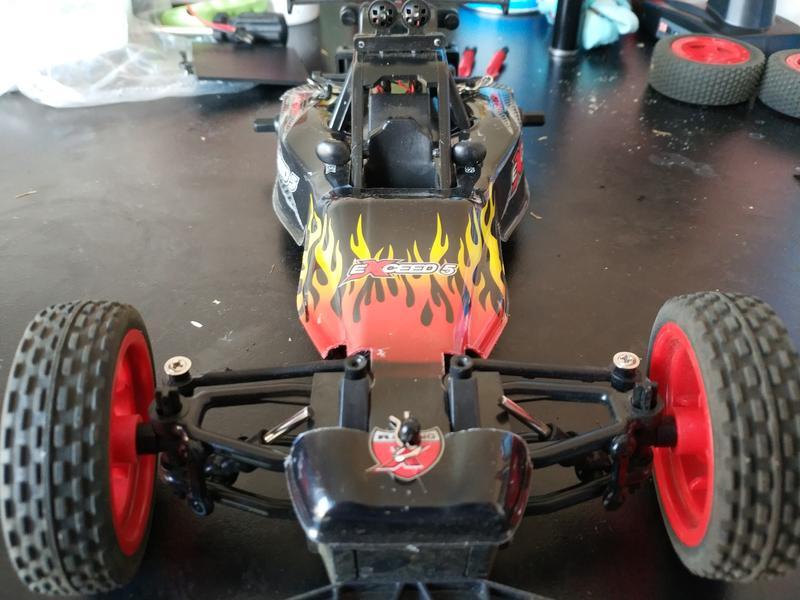 To get it to clip back onto the mount, you need to lift the front of the car slightly (as if it were jacked) so that the wheels can move back down a bit. It should go quite easily after that 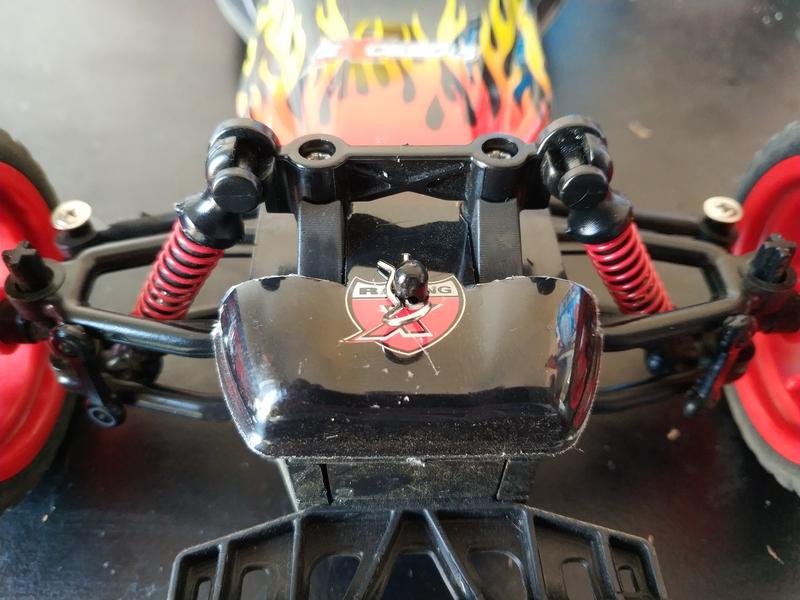 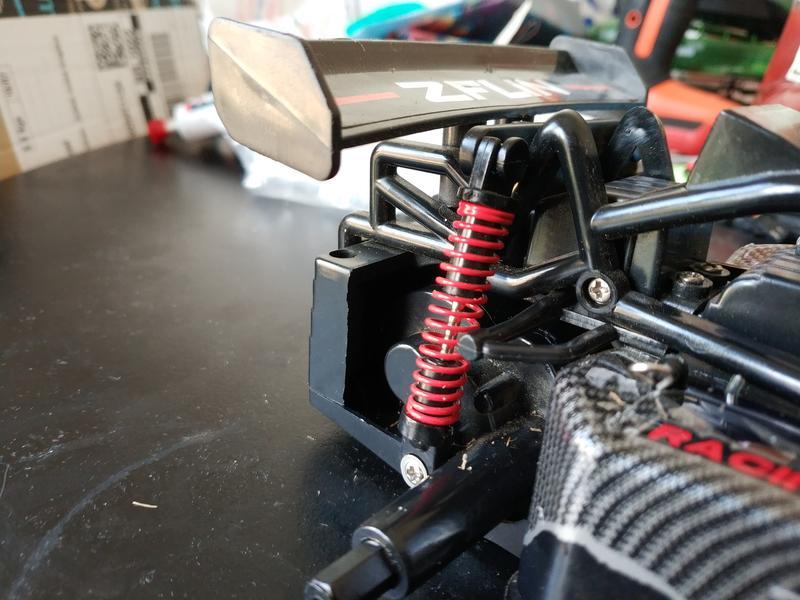 At this point, I opted to let it sit for another 10 minutes or so, just to make sure that glue had really set - remember it has to deal with a lot of torque, so you don't want your work undone, and definitely don't want the gearbox mucked up with tiny glue fragments.

Once you've waited as long as you can, connect the battery back in and give it a test run

Obviously, it's a little frustrating to have had to do this repair so soon after getting the cars. They were pretty cheap, but it still feels like something the manufacturer could easily (and cheaply) avoided. And cheap or not, I don't think it's unreasonable to expect that they'd last more than a couple of charges worth of play time.

That said, the fix turned out to be pretty easy in this case, so I'm glad I went that route rather than messing about contacting the seller through Amazon. Whether there'll be another fault later (and whether it'll be so easily addressed) is something that remains to be seen, but we should at least get some more hours fun out of these in the meantime - it's certainly taken a good ragging since I initially made the repair