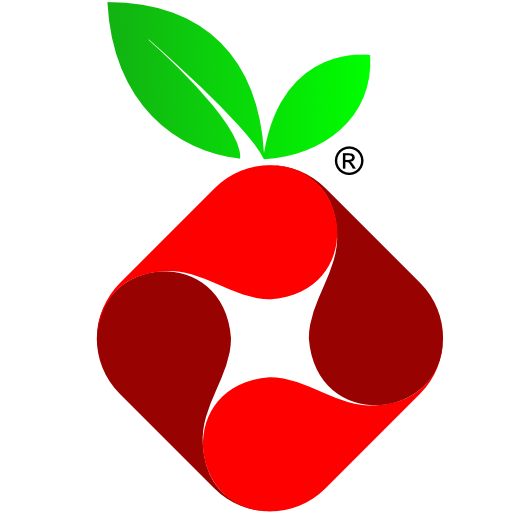 Pi-Hole provides simple tooling for managing lists of ad domains to block, but sometimes simple blocklists don't provide enough coverage on their own.

The mobile phone manufacturer Xiaomi is a good example of why a more flexible blocking approach is sometimes called for.

Various views within the MIUI system UI contain tracking/ads with a broad range of regionalised addresses used to support these data harvesting activites.

For example, Xiaomi phones sometimes contact the domain tracking.intl.miui.com, but there are also regionalised variations such as tracking.rus.miui.com and tracking.india.miui.com.

Once known, these domains are easy to block, but a purely reactive approach means that there will always be periods where data is collected unimpeded.

It's far preferable, then, to be able to predict what their other tracking domains might be. Unfortunately the regionalisation of Xiaomi's services isn't particularly consistent:

This inconsistency makes effective blocking of Xiaomi's tracking domains via blocklists quite difficult: not only do we need to be able to enumerate all current domains, we're also reliant on Xiaomi not launching stalkerware services in a new region.

Regular expressions (regex) provide a tool by which we can improve the effectiveness of our blocks.

Rather than needing to enumerate every variation of tracking.$foo.miui.com we can instead provide a pattern to match against

For those not familiar with Regex, this breaks down as follows

As if this wasn't powerful enough, PiHole also supports approximate matching allowing things like stemming to be used.

For example, this allows us to trivially create a regular expression that'll accept TLD substitutions:

This expression will match any of the following

So, why do we need an entire post for this?

However, adding a bulk list or linking a remotely maintained list provides a bit more of a challenge.

But support for that file was dropped when Pi-Hole Version 5 was released last year and regexes now need to be written into the gravity database.

This post details the process of automatically fetching and refreshing lists of regular expressions for Pi-Hole versions later than version 5.

In version 5, Pi-Hole moved to using the gravity database (gravity.db) for list storage. This provided some serious manageability benefits, but does mean that ingesting lists of regular inspections became a little more complicated.

The process we need to follow, though, is still fairly simple:

The final step is necessary because Pi-Hole is incredibly efficient about how it handles regex matching:

Pihole only checks each domain once for regex matches, so if you query foo.example.com it'll be checked against each of the regular expressions and the result of that check will be cached. the next query for foo.example.com will use that cached evaluation rather than evaluating the expressions again.

That cache persists until pihole-FTL is restarted (or is otherwise told to reload lists).

To implement this, we're going to create a short python script to fetch the lists, and (if they've changed) write them in before signalling pi-hole.

The script we need is fairly straight forward:

We're actually going to go a little further than originally specced: we'll also fetch a list of blocked DNS zones. This is a list of domains where we shouldn't just block the listed domain, but all of it's subdomains too (something else that static blocklists can't really achieve).

To implement this, we create a function that fetches the zone list and converts each entry into a pair of regular expressions

So, for example, if the fetched list contains aaxads.com we'll generate ^aaxads\.com$ and ^.+\.aaxads\.com$. The first regex blocks the apex domain (aaxads.com), whilst the second blocks all subdomains (foo.aaxads.com, bar.sed.aaxads.com etc).

Now that we can fetch and generate regular expressions, we need a function to write them into Pi-Hole's gravity database.

gravity.db is a sqlite database and we need to write into table domainlist, specifying the value 3 (regex blacklist) for the type column.

We also want to delete anything we inserted previously to ensure that removing things from the list leads to them being removed from Pi-Hole (otherwise a mistake in a regex would persist forever).

Now that we've created the functions we need, we need to actually call them in order to fetch and process the lists.

We'll use my adblock lists as our sources.

We now have a de-duplicated and sorted list of regular expressions, but we don't want to update gravity.db unless something changed - otherwise we'd be signalling pi-hole every time our task fires which isn't particularly efficent.

As a simple check for changes, we'll

We achieve this by converting our list to a string (so that it can easily be written to disk) and use a fast checksum.

A copy of the final script is available on Github.

Deploying the script is pretty simple.

Create a cronjob to run the script

This will schedule the script to run every 4 hours (on the hour). We run as root because the script needs to have sufficient privileges to both write into gravity.db and to tell Pihole to reload lists.

To verify that the regexes have been fed in and will be used, we use Pihole's web interface 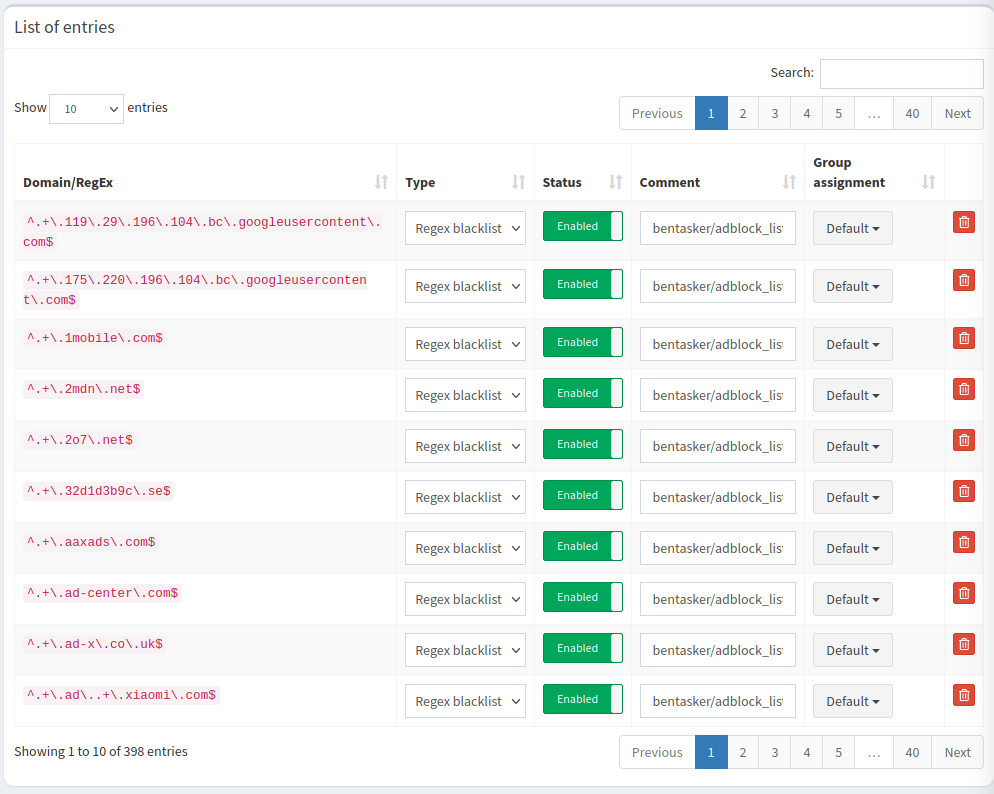 We can use one of these records to create domain names to test with.

For example, in the screenshot above we can see that aaxads.com is present, so we can test by creating nonesensical subdomains for it as well as testing the apex domain itself.

We can also use Pi-Hole's UI to tail its log to verify that blocks are definitely because of our regexes: Tools -> Tail pihole.log

We use dig (or nslookup if you prefer) to send Pi-Hole DNS queries for domains that we expect to be blocked (in these examples, the IP address of my Pi-Hole server is 172.17.0.5)

We can see that they've been blocked (the response is 0.0.0.0), and the Pihole log shows us why

Our two subdomains were blocked because of matches to our regexes. However, the apex domain (aaxads.com) was blocked by a gravity list - it exists in one of the static blocklists, so a regex wasn't needed in this case (blocklists are checked before regexes).

You might decide that you want to add your own regexes, but because they're powerful they're always worth testing first.

Pihole provides a command line argument that you can use to test regex matches, so that you don't need to set an untested regex live:

Remember to test similar names that you don't want your regex to match, and don't use regex's unnecessarily:

Some people, when confronted with a problem, think "I know, I'll use regular expressions." Now they have two problems. Zawinski, 2007

Although the method of feeding lists into Pi-Hole has changed in more recent versions, it's still reasonably straight forward to do so and is easily achieved with a cronjob.

As a result, you can implement some incredibly broad blocks that simply aren't possible with a static list of exact matches.