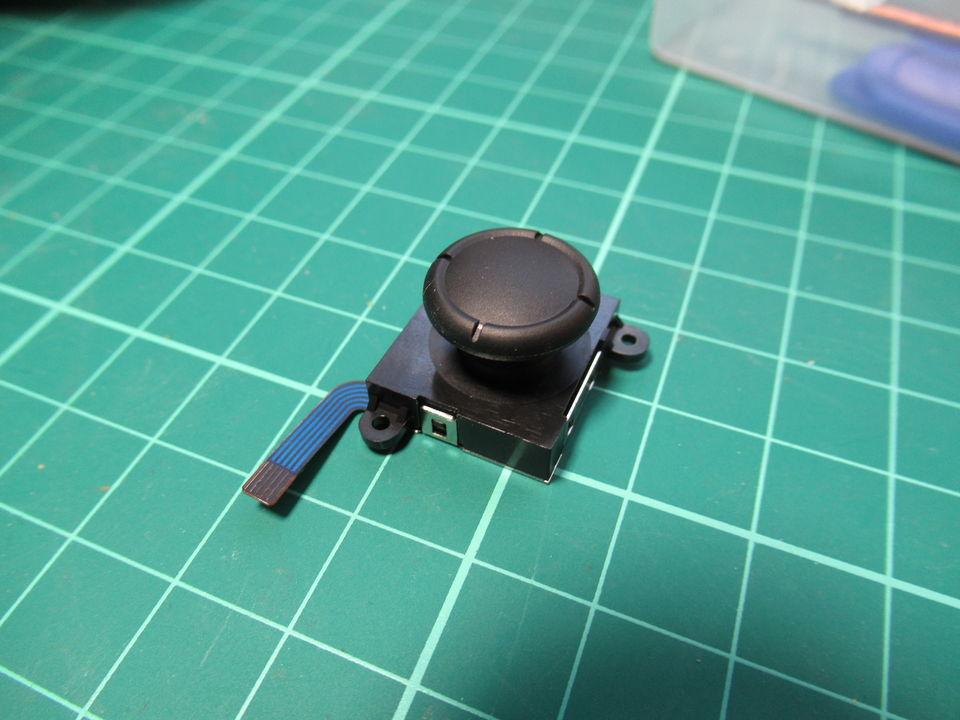 Although I've already got a Tri-wing set, I ordered this kit from Amazon and it came with all of the above (apart from the screw holder)

Do this by going System Settings -> Controllers and Sensors -> Update Controllers 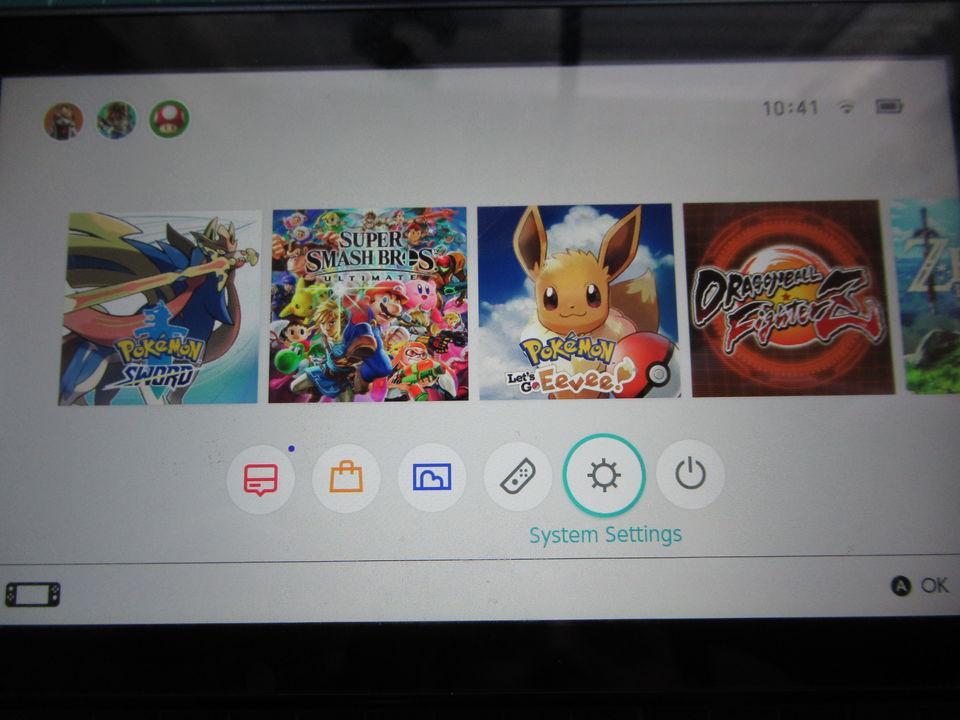 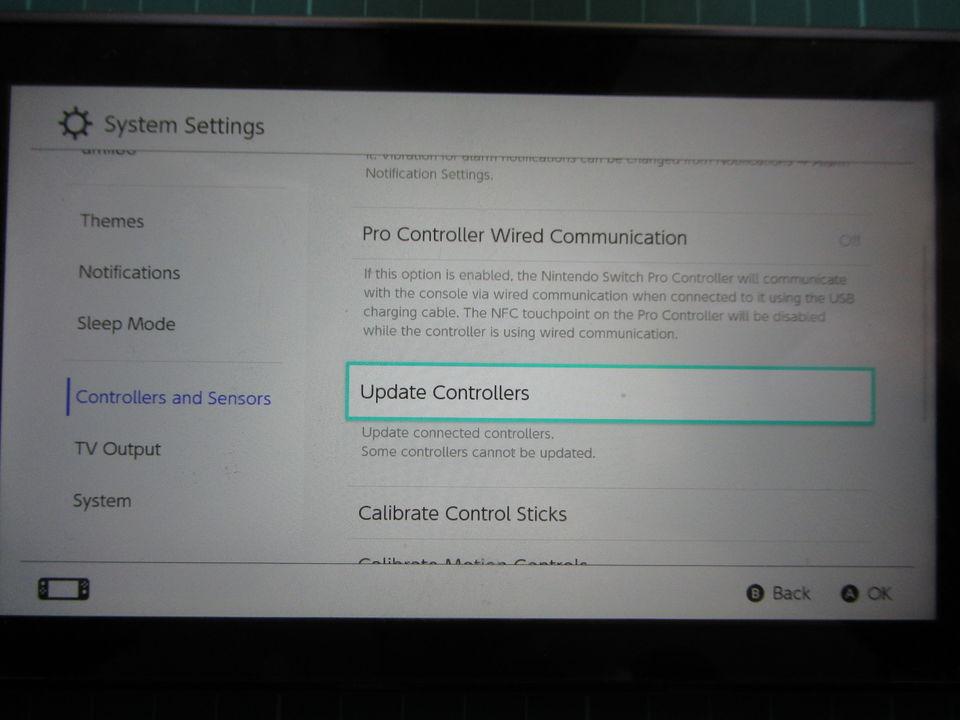 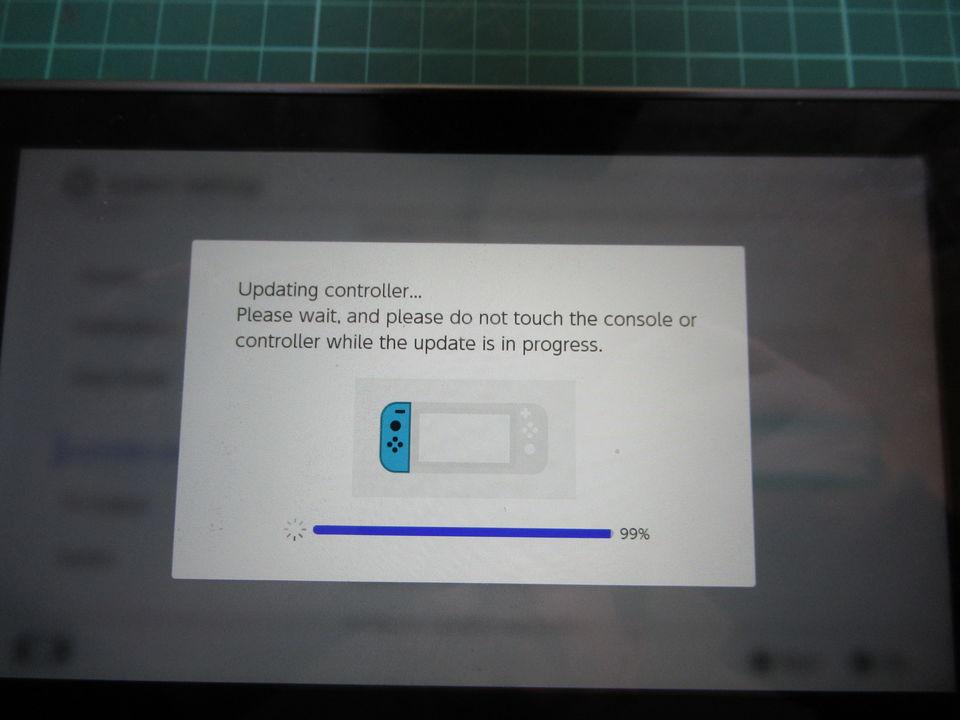 If you've still got drift issues, then power the switch off and proceed.

Detach the joycon from the switch and lay it face down. There are 4 tri-wing screws to remove 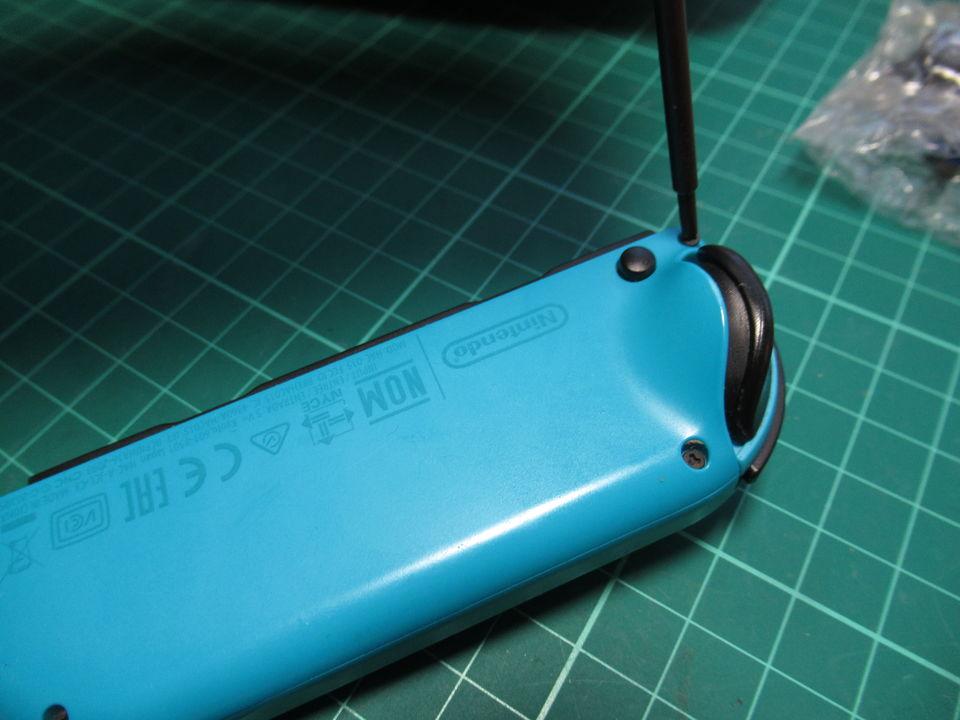 The two halves of the controller body clip together, so using a finger nail (or a spudger if you don't have nails) work around the seam carefully separating the two halves. Do not use a flathead screwdriver as you'll wreck the plastic.

The controller should now fold open exposing the battery 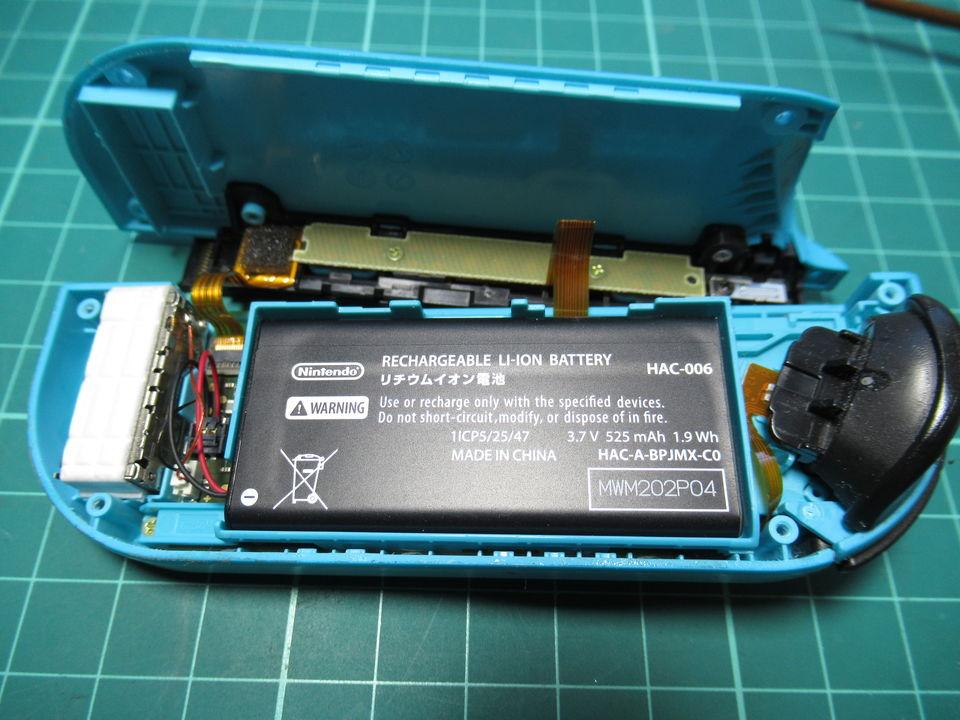 Depending on whether your joycon has been opened before, the battery may simply lift out. If it hasn't been opened though you may need to lever slightly as they use double-sided tape to hold them in - a carefully used flathead can be helpful here but be extremely careful not to accidentally puncture the battery. 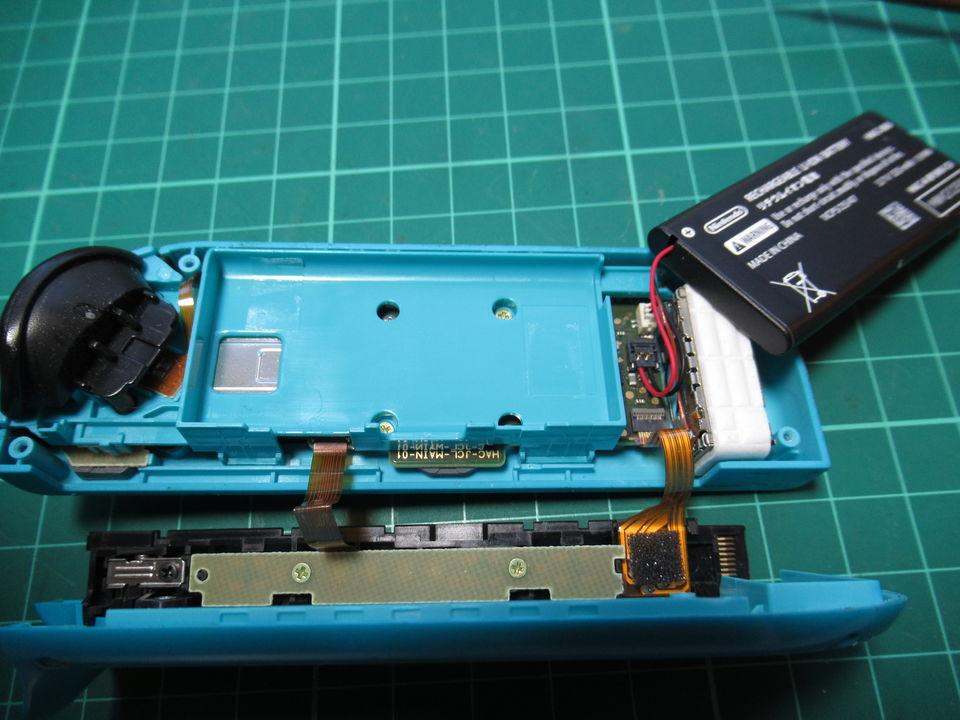 In the photo above you can see that 2 of the 4 screws in the centre are gold. These need to be removed, leaving the silver ones in place. There's also a third gold screw in the top right corner (obscured by the battery in the image above).

Once these are removed the battery compartment can be swung out of the way (the shoulder button may pop out, as below) 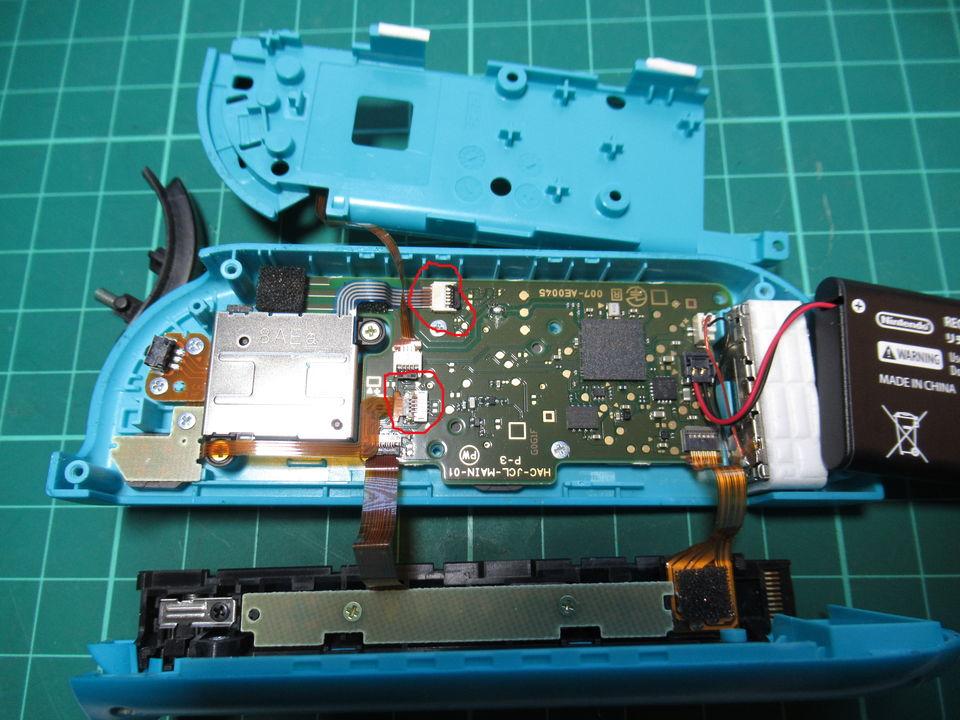 The means of disconnecting differs between the two. The top one in the image above slides straight out, whilst the lower one in the image has a small clip (the grey bit) which you must carefully flip back.

So, using your needle-nosed tweezers carefully pull the top ribbon cable to the left (assuming you're orientated like the image).

There are 2 phillips headed screws holding the analog stick in place, undo these to be able to remove the old stick

There's a seal so be careful pulling the stick out, you may need to tip it slightly to allow it to pass through.

Re-assembly really is just the reverse of disassembly, but with a little bit of additional frustration mixed in.

Get your replacement stick and carefully put it into place. Be sure to support the shell of the controller when putting the screws for the stick back in (otherwise you'll just press it back out of place again).

With the stick screwed back into place, it's time to face the frustration of getting the ribbon cables back in. Using whatever suits you best - tweezers or fingers - move the top ribbon cable up to the connector (remembering to go under the battery compt ribbon cable) and manouevre it back in.

This can take some time/patience/swearing but eventually it should slide in.

The lower cable is a little simpler, press it against the connector and slide it forwards a little. Then with a fingernail/tweezers, flip the grey clip back over (the frustration here comes from the habit of knocking the clip when trying to get the cable in place).

Either way, it should all be connected together again 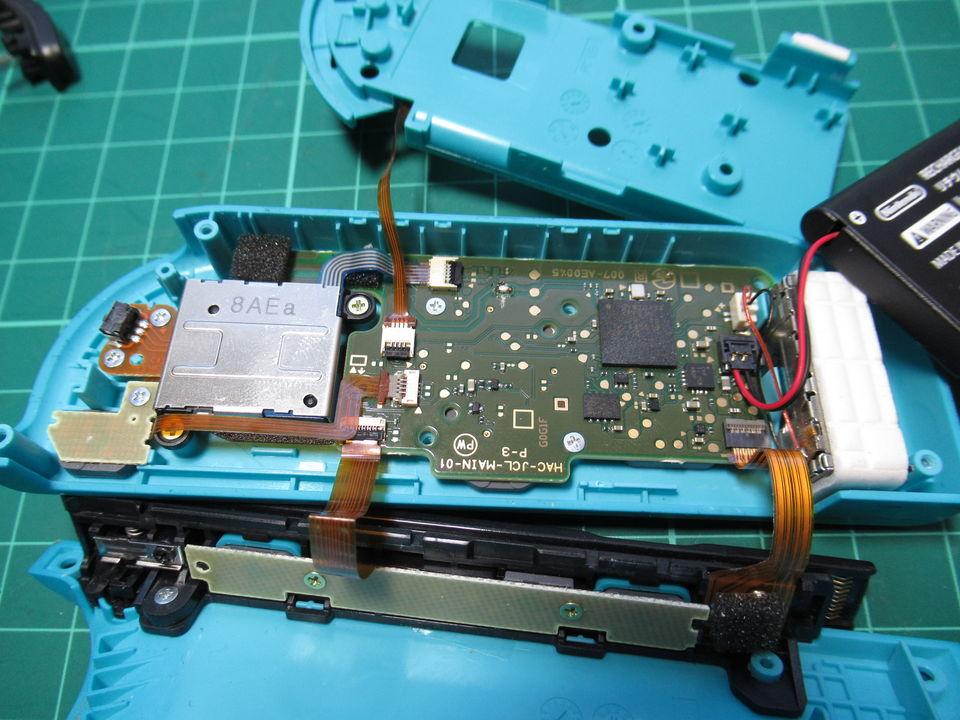 If you knocked the shoulder button out of place, that needs re-seating. Get the end furthest from the spring aligned first, making sure the lip on the button sits inside the shell.

Then make sure the spring presses back against the stop.

When positioned correctly, the button should sit in the open shell without popping back out 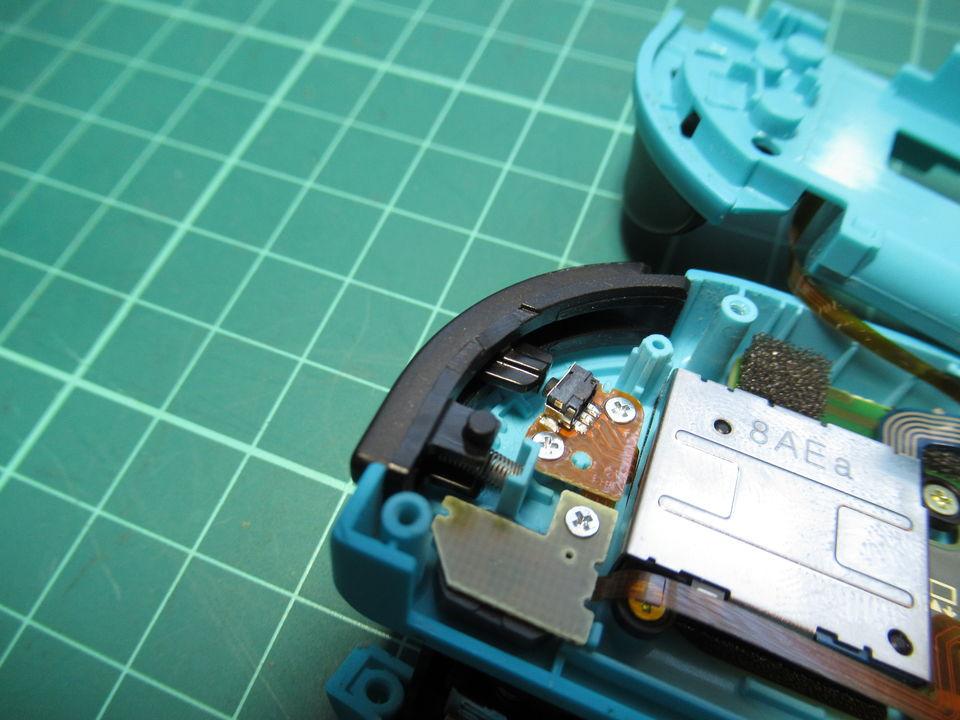 From here on, it's quite simple:

This should leave you with a re-assembled joycon 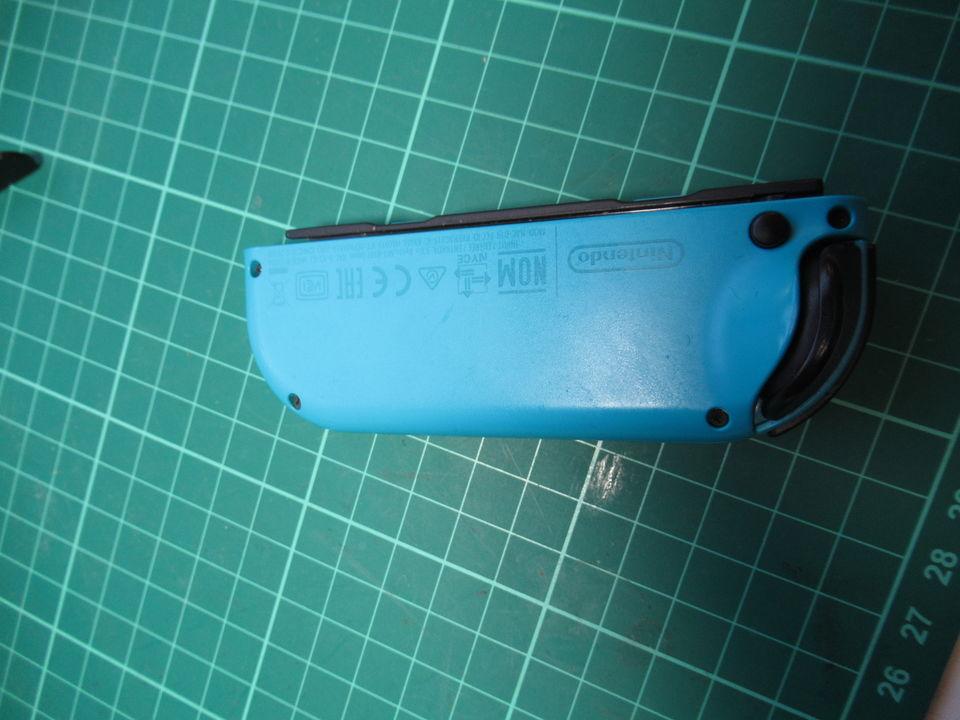 Although you've changed the stick, it's probably not correctly calibrated yet. So, clip it back onto the switch and power on.

Then System Settings -> Controllers and Sensors -> Calibrate Control Sticks and follow the instructions on screen.

Here's a video demonstrating the above process