The system collects the following information from a user's browser

Referrer is collected because it's useful to see where traffic is being sourced from - especially if there's a sudden drop-off (plus, it's interesting to see where I'm being linked to from).

Platform and Timezone are useful for planning and scaling purposes, and page load times are obviously useful for evaluating performance of the site.

The number of pages viewed in a session allows evaluation of the bounce rate, but requires storage of state in the user's browser - the sessionStorage object is used to store the counter for this, so state won't be tracked between browsing sessions (or even browser tabs).

Most importantly, none of this information is tied to a user's IP, and by default no session identifiers are used at all (more on that in a bit).

The system is implemented in the form of three components

The complexity around referrer is simply to ensure that we don't send referrer if the user is navigating within the site (Rule 4).

The LUA translater then takes this JSON, does some validation (scrub junk entries etc) and translates it into Line Protocol ready for writing into InfluxDB.

So, we return some LP that looks a bit like this

I opted to have referrer, platform and timezone as fields to keep cardinality down - it's an unusual approach, but having a mischievous mind myself, I tend to assume that at some point, someone's going to come along and try fuzzing the system.

The data ultimately gets written into InfluxDB, and can be reported on from there.

I currently have limited need to scale this up, but wanted to make sure that some scaling was possible. There are a couple of aspects to this - infra/hardware and the data itself.

It's plausible that, at some point, the layer running the LUA translator may need scaling - there are a finite number of workers, and each POST in will tie one up whilst the processing and upstream write complete.

Having each node write (1 point at a time) directly to InfluxDB is potentially going to turn into a headache if scaled too far - and even without that, you have to consider connectivity between your LUA node and InfluxDB (high latency means each POST takes longer to complete).

It's a fairly trivial problem to address though: rather than running InfluxDB on that node, you run Telegraf with the InfluxDB listener active. That's as simple as adding

to the Telegraf config.

The LUA layer will then write into Telegraf, which'll write onward to InfluxDB in batches. So, LUA gets fast writes (reducing contention at that layer) and you minimise the risk of lost writes.

This is a little harder to address, and requires a little bit of compromise.

To understand the issue, if we take the LP from above, the series (comprised of measurement, tagset and field names) is

The problem is, if another request with the same series were to be logged in the same millisecond, the 2nd record would overwrite the 1st.

On a low traffic site, there's a low risk of that happening - 1ms difference means the issue doesn't occur, but a busy site has a higher chance of it occuring.

This is, to some extent, exacerbated by my decision to set referrer etc as fields rather than tags - the additional cardinality would further reduce the likelihood of this occurring (though not entirely eliminate it).

In a traditional analytics system, this isn't much of an issue, because you've got a unique differentiator: the user's IP. But the whole point of this system is that we're not supposed to be able to tie activity back to a given user.

As a quick fix, I decided to add client side generation of a random session identifier

This generates an 8 character session identifier (e.g. bc05-0d99). sessionStorage is used so that the UUID doesn't persist between browsing sessions, or even get shared between browser tabs. When present, we use it as a tag, addressing the issue of overlapping writes.

When enabled (it's off by default), this UUID provides some uniqueness to help prevent collisions. However, it also violates principal 4: the UUID could be used to track a user's movement within the site during that browsing session, which is not ideal.

The UUID is stripped when downsampling from recent to historic storage, which mitigates the impact of this change a little.

Whilst I could have generated a unique ID for each page, the result would be massive cardinality (a series per page view, in fact), so this seemed better. Technically you could, perhaps, have the client generate a nonce and hash that together with the user's IP (letting the agent decide when to rotate the nonce), but the complexity that that adds makes things less transparent to the user (although, now that I think about it, I may allow the agent to randomise rotation of the session identifier).

With the data in InfluxDB, reporting is pretty straightforward - just a case of making a couple of dashboards 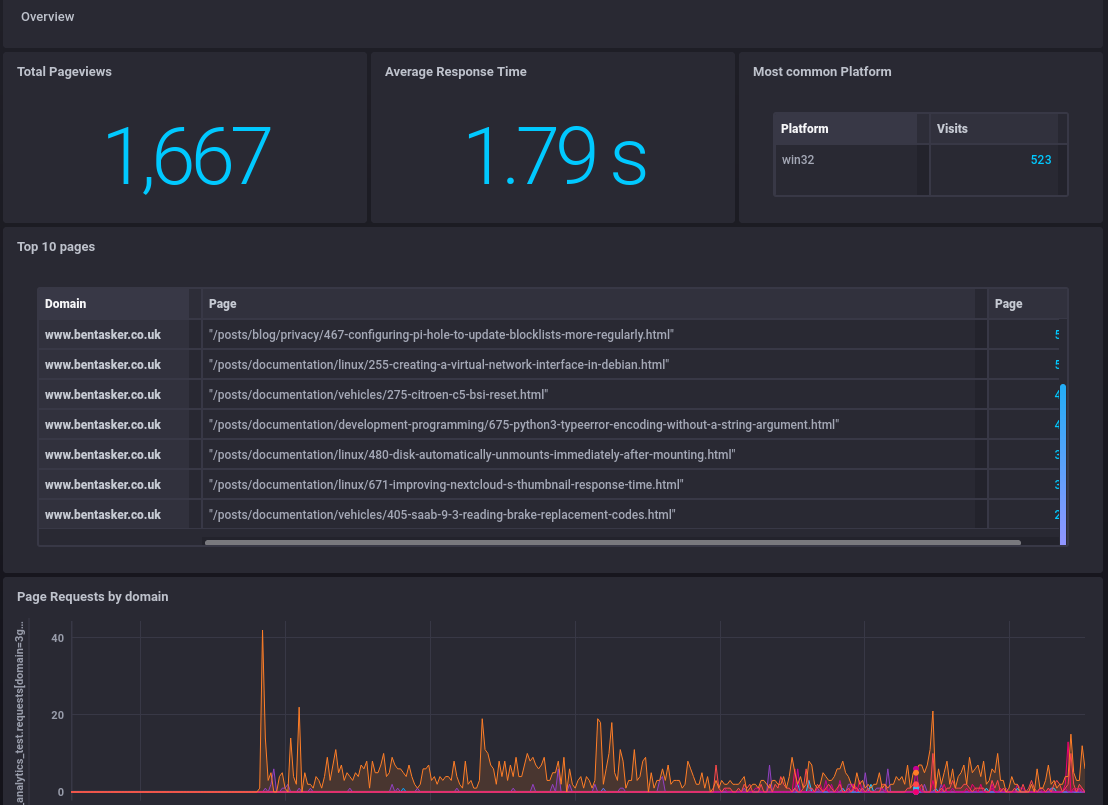 At a glance, I've got the stats that mattter - how much traffic's coming in, the average page load time (skewed up by the .onions if you're wondering), which pages are doing well and what request rate each domain is seeing.

I can also pivot out referrer, platform and timezone information with some Flux like the following:

The information above is only retained for about a week - I don't need that kind of granularity longer term.

For longer term use, the information is downsampled into 15 minute aggregates - at this point, the optional session identifiers are stripped (if they were even enabled in the first place).

The referring domain field is reduced in granularity and turned into a tag - as a short example, the following Flux will collapse all domains starting with www.google down to just google.

The response is processed further in Python (The plan is to have it email a periodic report) and then written back in (otherwise I'd have used to()).

Response time gets broken down into mean, min and max

Along with 95th percentile - courtesy of the quantile() function.

I've not actually implemented any processing on the stat detailing how many pages a visitor has viewed - it's not proven to be as useful/interesting as I assumed, so will remain a short-term stat (for now, it may even get removed from the agent at some point).

With the long term data now in a more normalised format, if I later decide that further downsampling is necessary, I can easily do so with a continous query or task.

There are some additional improvements I'd like to look at making in future:

In order to further dissassociate users, I want analytics writes to come in via CDN - that way the user's IP is never available to my equipment (well, as long as the provider allows me to turn off X-Forwarded-For).

I'd like to collect some User-agent stats, but there's some caution needed here as it can contribute toward user specific fingerprinting (my current line of thinking is to have the agent normalise before submitting).

There are, obviously, some sacrifices compared to a traditional analytics system - I can't, for example, track whether a user is a repeat visitor. But, that's very much by design: I'm collecting the stats required to monitor and improve delivery of my content, whilst keeping that information entirely disaccociated from users themselves.

There's no good reason to record a user's IP, in perpetuity, to track pageviews. There are some arguments for tracking subnet/AS along with response times, but I'm not currently responsible for the delivery network, so there's little need for me to capture that information. I can however, identify when users in a given timezone are being underserved.

What I've got, then, is a high level overview of when and where my sites are accessed, and how long it takes to reach DomReady. Being JS dependant, the stats will exclude (most) bots, so the stats collected will generally represent real users. Some real users will block javascript, and so will also be excluded - whilst it's possible to collect stats on this (by using noscript and the like), it's doesn't feel right to do so.

I mentioned earlier that it's interesting to see where traffic is coming from, and one thing that I sometimes find myself doing, is looking at pages that link to me. The reports above only show domain and don't allow me to drill down, however, I can quite easily look up the full referrer URL with the following Flux

There will, undoubtedly, over time, be some evolution in the stats I collect (I'd like to come up with a good time-on-page collector) and the way I process them, but this initial implementation has shown that it's perfectly possible to do so in a way that doesn't tie visits to the vistors themselves.

There are some additional stats I'd like to collate in future, but haven't yet thought through how best to go about it. At first glance, the most privacy friendly approach is to normalise/anonymise on the client side, but that increases complexity of the agent - ideally I'd like it to be relatively simple so that curious users can quite trivially audit it.

I've always tried to go over and above when it comes to privacy and transparency on my site, there's a fine balance to maintain between necessary operational data and user privacy, and hopefully this will allow me to better strike that balance.