Banks aren't exactly known for living on the bleeding edge - even where good security practice moves on, they tend to be years behind. For better or worse, they lean toward preferring stability and consistency over chasing the latest and greatest.

However, this issue doesn't really fall under that traditional niche of "well, banks will be banks".

Barclays bank (and others) are giving 3rd party scripts access to their Internet Banking login pages - the result is that a compromise or mistake at their supplier could compromise their customer's login credentials.

I highlighted this issue a few months back, and Barclays replied with "deliberate, not an issue" (paraphrasing a bit there), so I'm now getting around to writing it up.

I stumbled on this because the way in which they've implemented this behaviour is also fairly fragile.

My adblocker was (IMO correctly) blocking the third party domain, but this resulted in the login form locking up for about 30s whilst it's attempt to submit stats timed out.

So, I created a screencast to help explain the issue and sent it over to Barclays.

If we ignore the security aspect for a second, the developer part of me is also riled.

They're failing to sanely handle circumstances where their request fails - this is the internet, a proportion of requests fail all the time - and locking the browser session up. Security or not, it's bad code.

Unfortunately, it's (obviously) not their remit to fix stuff like this, so they escalated to the web team, who paid lipservice to the report.

They have said that the ad blocker could be causing the issues. Can you turn off all analytics using your cookie preferences, and then change your ad blocker to allow our online banking website and all other sites. We use some additional sites such as (the http://we-stats.com that could be getting blocked) to help us protect and monitor your account.

Not only does the video note that it's my adblocker blocking it, so does the text I sent with it.

Getting an initial report rebuffed with absolute nonsense is  - unfortunately - not uncommon, so I pushed back 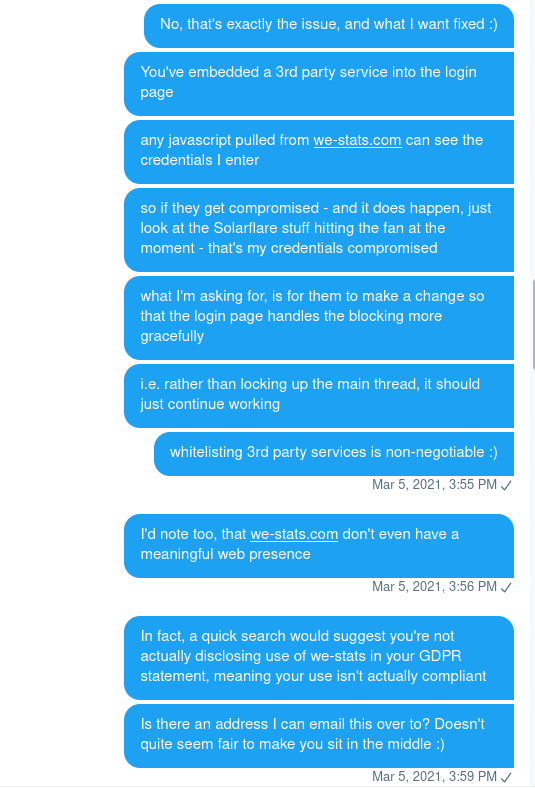 The bit that really matters security wise is

so if they get compromised - and it does happen, just look at the Solarflare stuff hitting the fan at the moment - that's my credentials compromised

Although, honestly, I'd have settled for them just fixing their JS so that the page doesn't block.

That final request (being able to speak direct to someone) was ultimately rejected.

Thanks for getting back to us again Ben. The team have advised the tool that we use (the http://we-stats.com that you're blocking) builds up a behavioural biometric of your use of online banking, and so if anyone else ever tries to access his login, that tool will help to spot and block them. It’s all there for your protection.

Let's just examine that claim for a minute:

if anyone else ever tries to access his login, that tool will help to spot and block them

That's a nice thing to say, but it's demonstrably not actually true.

Between the video above and conversations with Barclays, we've established that my adblocker is blocking their tool. And yet, crappy coding aside, I'm still able to login to my account.

If someone gets my credentials, then, it doesn't matter whether their tool has built up a "behavioural biometric" of my use or not because it can be prevented from acting:

The system is supposed to offer protection at step 4 (preventing Bob from logging in), but Bob has prevented the system from running.

As a result, the company behind we-stats have built up a detailed biometric profile of Alice for no good reason.

The system, as described is fundamentally flawed because it relies on  client-side enforcement.

I don't pretend to be an expert in GDPR compliance, but at this point I was sufficiently motivated to go and do some digging. 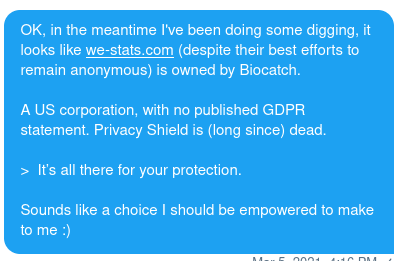 There seems to have been some effort put into keeping the owner of we-stats.com anonymous, but with a bit of sleuthing around the internet, it looks like it's owned by Biocatch.

The message above does contains an inaccuracy: Biocatch are Israeli rather than American.

The underlying point, though, remains the same - they're a non-EU company, and Barclays GDPR statement doesn't seem to make any reference to them or the services they're providing - presumably because they've decided to ignore the transparency that GDPR was supposed to bring and instead write

Our service providers and agents (including their subcontractors). This may include, for example, third-party collection agents we use, or where we pass your details to someone who will print your statements, deliver a gift or provide a gesture of goodwill

I took one last shot, asking the social media team to send the web-team a link to my ticket (MISC-45) in case something was perhaps being miscommunicated somewhere along the line, within that ticket I added a comment to try and lay out the issue as well as suggest a mitigation 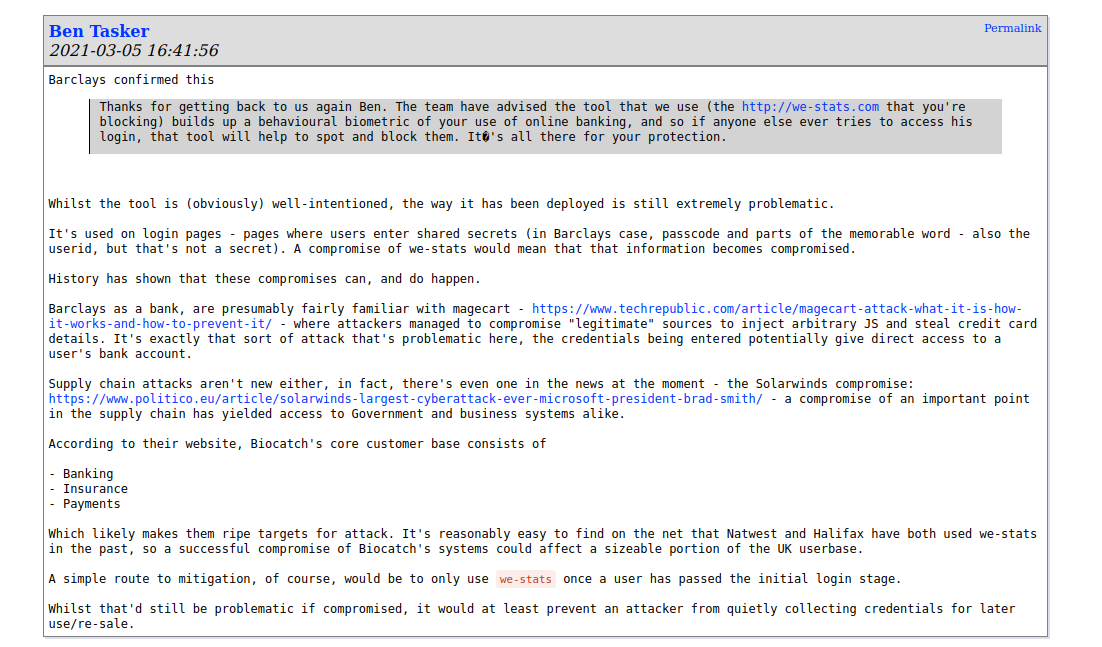 Ultimately, the team responded to reiterate that

that we use (the http://we-stats.com that you're blocking) builds up a behavioural biometric of your use of online banking, and so if anyone else ever tries to access his login, that tool will help to spot and block them.

So, not only were they happy to leave a gaping hole, they weren't going to fix the bit that had been bugging me either (don't want to wait 30s to enter text into a field? turn your adblock off mate...).

The social media team suggested that the only way to escalate it further would be to raise a complaint.

So, I went to Barclay's complaint form... which hung, because I was blocking we-stats. Once I was able to enter text, I still had to keep the text of the complaint brief, because Barclays have implemented a character limit of 2000 chars (I'm sure that doesn't cause any issues with complex complaints...).

Nothing has come of that complaint since.

Which is perhaps unsurprising: The domain we-stats.com was added to the EasyPrivacy adblock list 2 years ago - which presumably means that Barclays have been breaking user's login flow for 2 years.

Having 3rd party scripts on the same page as a login form is never good, but there are mitigations that can be applied.

One of these is using Sub Resource Integrity (SRI) when referencing scripts etc.

With SRI, you specify the checksum of the file you're referencing - the browser then fetches the resource, and if the checksum doesn't match then it'll refuse to load it. So, if someone compromises your supplier (the 3rd party) and changes scripts, your users don't get compromised (as their browser will refuse to run the script).

Barclays are not using SRI for their we-stats related stuff, but clearly have heard of it as evidenced by this fairly ugly snippet

What they're doing here is building a reference out to a tagging/analytics service - presumably the obfuscation is there to try and prevent people from blocking it.

The result of this function is the addition of the following to the page head.

That's it - of all the scripts they're loading, the only one using SRI is a tagging service...

TiqCDN, incidentally, are operated by Tealium - who offer enterprise tracking and analytics - that's another 3rd party with access to the login form then.

However, even this example of good practice is an illusion, because utag.js adds an external JS file to the DOM without SRI

Running with adblock disabled shows that

The request is clearly used to submit information via the querystring, but if an attacker were able to manipulate the response, the browser would execute it as with any other script - they could have achieved exactly the same by using a tracking pixel.

What makes it especially laughable, though, is that the value appears to be static (two slashes) - even if there was a reason they need it to be a script, they could trivially have included a SRI hash when adding the <script> tag to the DOM.

Barclays do implement CSP headers, which helps limit the level of mischief that could be achieved by compromising a script.

Whilst it's good that an attempt has been made to limit things, the inclusion of unsafe-eval and unsafe-inline doesn't exactly instil confidence.

Barclays have also missed a trick here - having a CSP is one thing, but it's a lot more useful if you monitor its enforcement -  you want to know if/when something that violates the CSP occurs.

The report-to (previously report-uri) directive exists to allow monitoring CSP and can be used as an early warning that you've introduced a cross-site scripting vuln, or perhaps added a resource without updating your CSP.

So whilst some care is still needed, it's use is still much lower risk than embedding random 3rd party resources.

Getting back to we-stats.com though, for those wondering what it does when it's not blocked - the answer is it chats a lot.

We can see too, that once up and running, requests start being made to a logging domain - logs-6bb5a42d.eu.v2.we-stats.com

Comms to and from both endpoint are themselves obfuscated.

A quick de-obfuscation of the calling code shows that they've include a zlib library, though even after de-base64'ing it doesn't look like zlib. The script's >6000 lines long, so I gave up looking.

Ultimately, they're tracking when and where you click - from reading Biocatch's literature it looks like one of the things they're trying to gauge is whether you know your way around the interface. You'd hope that they're not capturing the contents of form fields, or keypresses, but there's no way to verify (and mistakes do happen).

Barclays obviously feel they need to use we-stats.com in order to protect their customers. So, in the spirit of that, let's be fairly explicit about what they could fix to help achieve that and mitigate risk

I'll start by saying that I'm picking on Barclays a bit here - they're not the only ones using we-stats. I found evidence on the net that Natwest and Halifax have previously used it. I would point out though, that despite having an account with them, I never noticed Natwest's use because my adblocker blocking it didn't lock up the interface.

Banks have a hard balance to strike, they need to try and ensure account security without overstepping the bounds of usability. Banking, of course, has always been notably conservative around new technology.

But, the sad truth is that Barclays have really screwed the pooch here.

If their stated aim is to improve security, then unfortunately they've missed the goal more than a few times.

What they seem to have done, is invest in security theatre (they've previous form for that too) taking on board a whole load of complexity for little tangible gain. The outcome of complexity is almost always that people find gaps to slip through.

Having said all of this, the bit that still annoys me is Barclay's initial response.

Any sane developer should consider "your page locks up if..." as a bug. It doesn't matter why the request for the resource is failing (this is the internet and you should expect that requests will fail and/or be blocked - especially if you're referencing known trackers), locking a page up is never an acceptable outcome.