I've never placed much importance on having a nice looking desk: it's just a bit of furniture that you pay no real attention to whilst it holds the stuff that you are paying attention to.

When we last moved, I switched from my original desk to using one that I'd previously been using as a workbench. The switch was purely on the basis that the workbench didn't have drawers built in, giving more room for me to move my legs around.

As a result, for the last couple of years, my desk has been an unimposing white thing. At 46cm deep, it has just enough space to hold my various bits and pieces 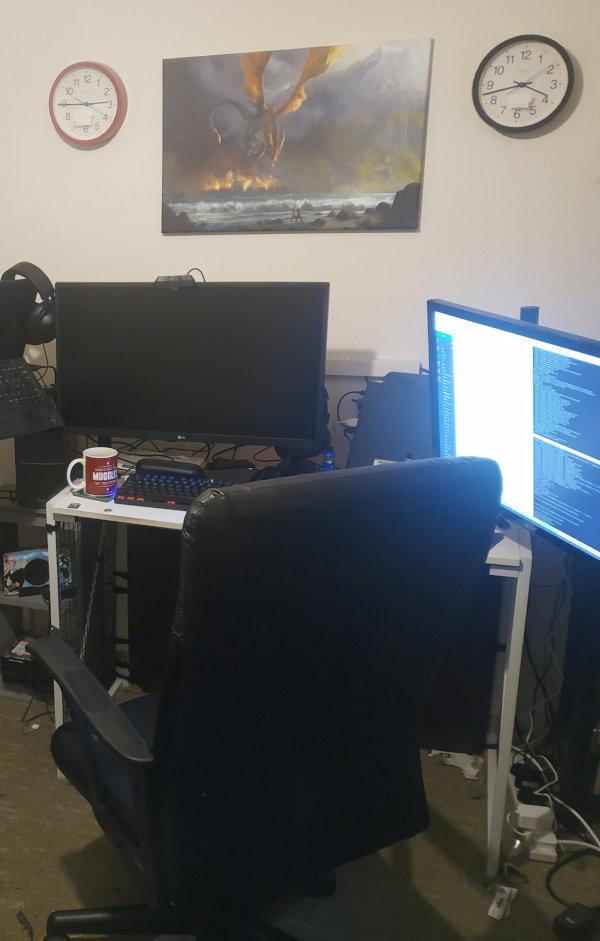 Until recently, this worked absolutely fine.

For reasons involving a motorcycle and diesel, I've got longstanding knee pain. Lately, it's been giving more jip than normal so I decided to order a foam foot-rest to see whether that helps.

Unfortunately, doing so has revealed something I hadn't previously realised: the recess under my desk is perfectly sized for me. Adding the foot-rest raised my knees too high, so I needed to wheel my chair back a bit, leaving me unable to rest my wrists on the edge of the desk.

I didn't want to replace the desk entirely, so decided to try and make a topper that would extend the desk outward, allowing me to sit a little further back whilst still providing that all important wrist support.

This post details the process I followed to make my desk extender.

My choice of materials was driven by two factors

The second was as important as the first: if I was going to spend out on materials, I might as well either just buy a new desk or build one from scratch (something I want to do at some point, but I'm not quite there yet).

At it's simplest, this project is just a sheet of wood across the top of the desk with a protrusion at the front.

However, that protrusion needs to be capable of bearing weight. My desk's already the perfect height, so using a thick rigid sheet wasn't something I considered a viable option.

Instead, I opted to use some thin 3-ply, with an old bed slat providing rigidity along the protrusion. 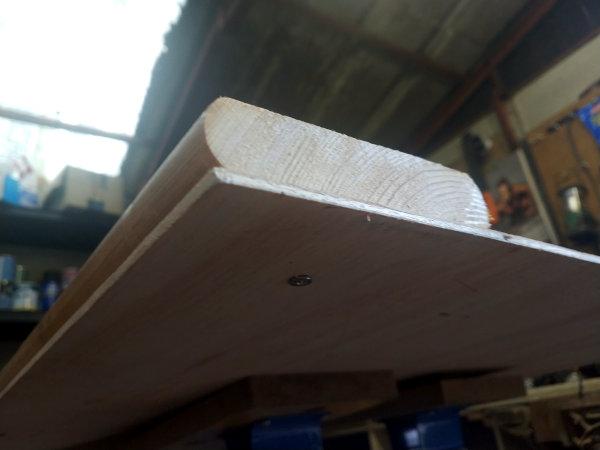 Then using red and black spray paints, I created a mottled effect (about the only effect I can reliably achieve with spray, but also one I like) 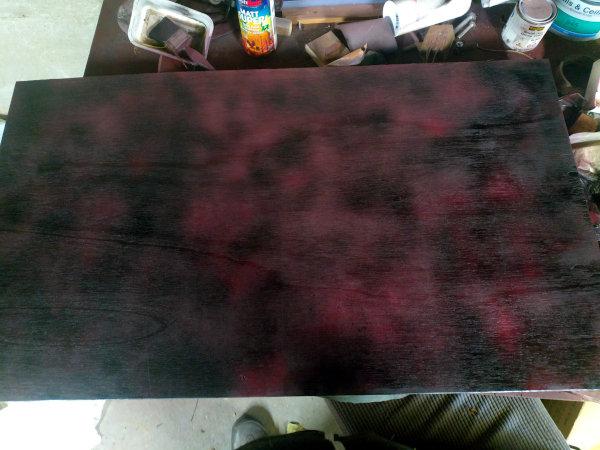 To try and protect the surface, I gave it a coat of hard wearing wood varnish.

This stage was made somewhat harder by me trying to take the quicker lazier route.

My monitors etc are mounted on poles which clamp to the desk. But, to provide extra stability, I also have a piece of scrap wood under each.

I didn't want to have to uncable everything, so the idea was that I'd slack the clamps, lift the posts slightly and slide the topper underneath it.

If you're in a similar situation, don't just... don't.

Eventually, though, I got the topper into place and screwed it down. To provide a little bit of extra support, I screwed some baton off-cuts to the underside 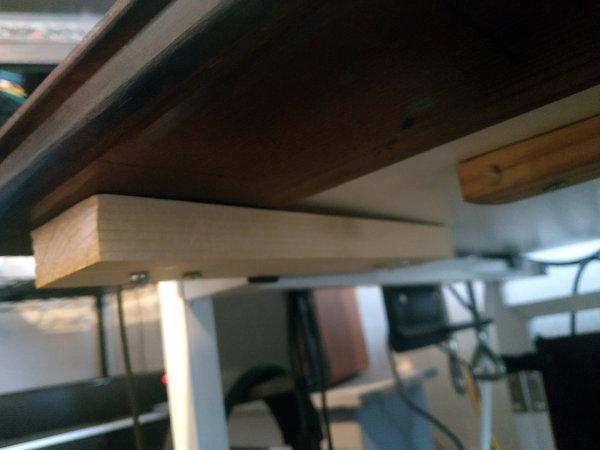 At this point, I thought I was done 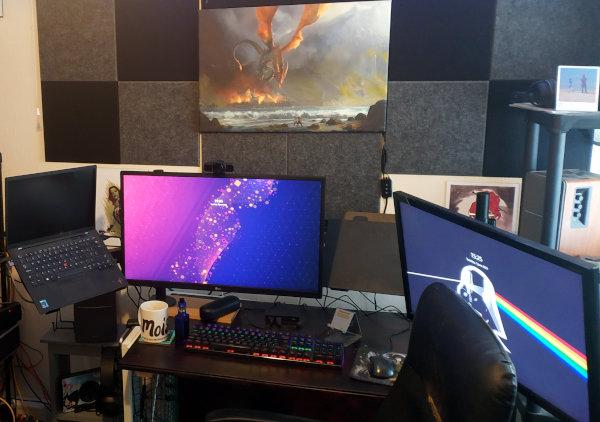 Protecting against wear and tear

It soon became clear, though, that the hard-wearing varnish I'd used couldn't cope with rigours of a desktop's life.

Small scratches started to appear in the paint, and the surface started to feel rough under my wrists. It was clear that something needed to be done before it became an unusable splintery mess.

One obvious option was to paint some more varnish onto the topper, but the previous lot (despite being "extra tough") had only really lasted a couple of weeks.

Instead, I decided to build up layers of furniture polish. So I ordered a bottle of Liquid Wax and (after touching the paint up) sponged that on 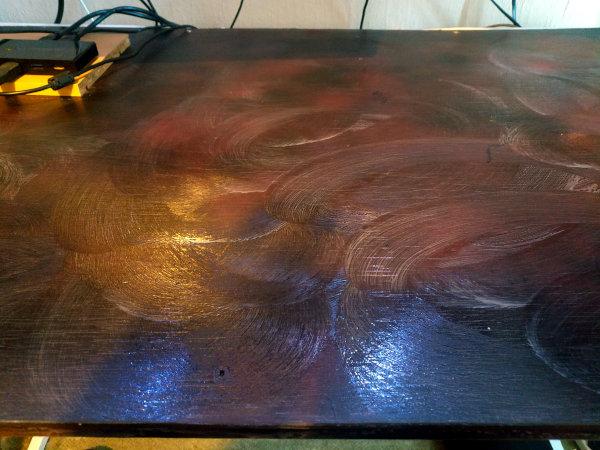 I let the wax dry and buffed it before adding a second (and then third) layer. 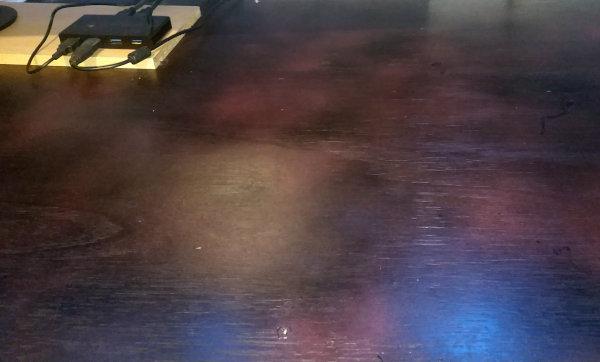 The polish contains carnuba wax, so the finish is hard and won't melt/soften under the warmth of my wrists, though a freshly made cup of tea might melt it (it's melting point is apparently 82-86C).

I really like the final effect and the extension means that I've now got a bit more leg-room. 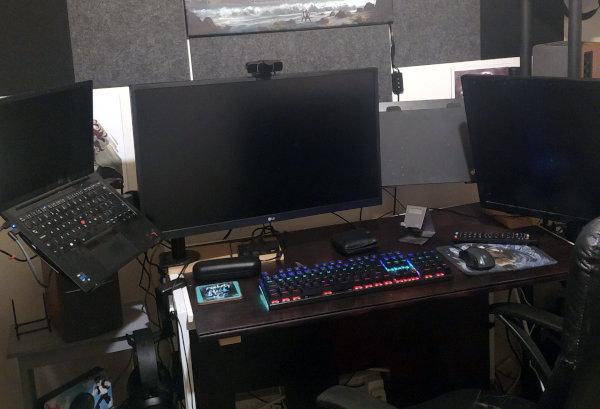 The wax based polish is much, much more comfortable under my wrists than the varnish had been, and has proven to be much more durable.

Because I used scrap wood, the cost of the project was pretty low, coming in at £6.61 (for the polish).

A replacement desk would have cost at least £40 (more if I wanted something that'd last) and as well as wasting an otherwise perfectly usable desk, would have needed me to (briefly) upend my office whilst I swapped the desks around.

I've added about 12cm of depth to the desk, whilst it could potentially have extended further, there's a limit to how much depth can be added before you need to worry about a lever action tipping the desk over.

Although I'm pleased with it, this project has proven to be a bit of a double edge sword.

When the finish first started failing, I considered ordering a new desk, but couldn't find any that I liked as much as the effect I'd created.

It turns out that I do care, at least a little, about the look of my desk - that's likely to pose a problem when the time comes to finally replace this one.