Once this process is complete, we'll have a server set up and running iRedMail, using the following underlying components

There are a few small bits which need doing before fetching and triggering the installer.

You should install on a freshly installed OS to reduce the likelihood of conflicts during the install process.

Firstly, we need to make sure the server has (and knows) it's Fully Qualified Domain Name (FQDN) so that it identifies itself correctly when it connects out to other mailservers.

Make sure the OS install didn't dump exim onto the system

The next thing to do is to fetch the installer.

There's a slight caveat here on Jessie. IRedMail seems to have dropped support for Jessie, so a slightly older release (0.9.7) needs to be installed rather than the latest (0.9.9). This isn't ideal, but the installer appears to use apt for major components, so we shouldn't be exposed to too much risk (as we'll still be getting the latest version the repositories have).

The installer will now run, it's safe enough to accept the defaults and the options it asks for are fairly self explanatory

The only default I didn't accept is the firewall rules, I'll create those later

Once the installer completes, your system is nominally configured as a mail server (albeit using self-signed certificates for everything)

The management interfaces are available at:

The admin account to use with iRedAdmin is the one you configured in the installer.

Use this to add a domain and the necessary user accounts

Next, we're going to create the basic firewall set. Part of the reason I've done this separately is because I have a separate admin network, so will restrict HTTPS access from the wider web (if you intend to do this, bear in mind this will also mean no web mail).

The installer has already set up fail2ban, so there will be some rules for those. What we need to add is

We then want to make sure that rules will persist following a reboot, so install the iptables-persistent package

The server currently uses a self-signed certificate on all interfaces. Traditionally it wasn't unusual for mailservers to do this, but lets use LetsEncrypt so that we can present a valid certificate.

The first thing to do is to install certbot. To get the latest version we need to ensure the outdated Debian package isn't installed

Then we fetch and install certbot

Next, we need to allow port 80 through the firewall

Now, lets give certbot a run. Remember to switch the domain for your mail domain

As it's the first run, certbot will install its dependencies, and then ask you a bunch of questions

Once it's complete, the cert and key will have been saved to

Set up a cron to trigger the renewal check daily

Now, we want to make the various services use the new certificate, so we'll move the snake-oil one out of the way and create a symlink

Now, if you're comparing this to the iRedMail documentation, you may think the next step is to chmod the LetsEncrypt directory to make it world readable. Do not do that, it's completely unnecessary (the daemons read the cert before they drop privileges) and means any user on the box could compromise your private key

We can verify this from our desktop using OpenSSL's s_client module 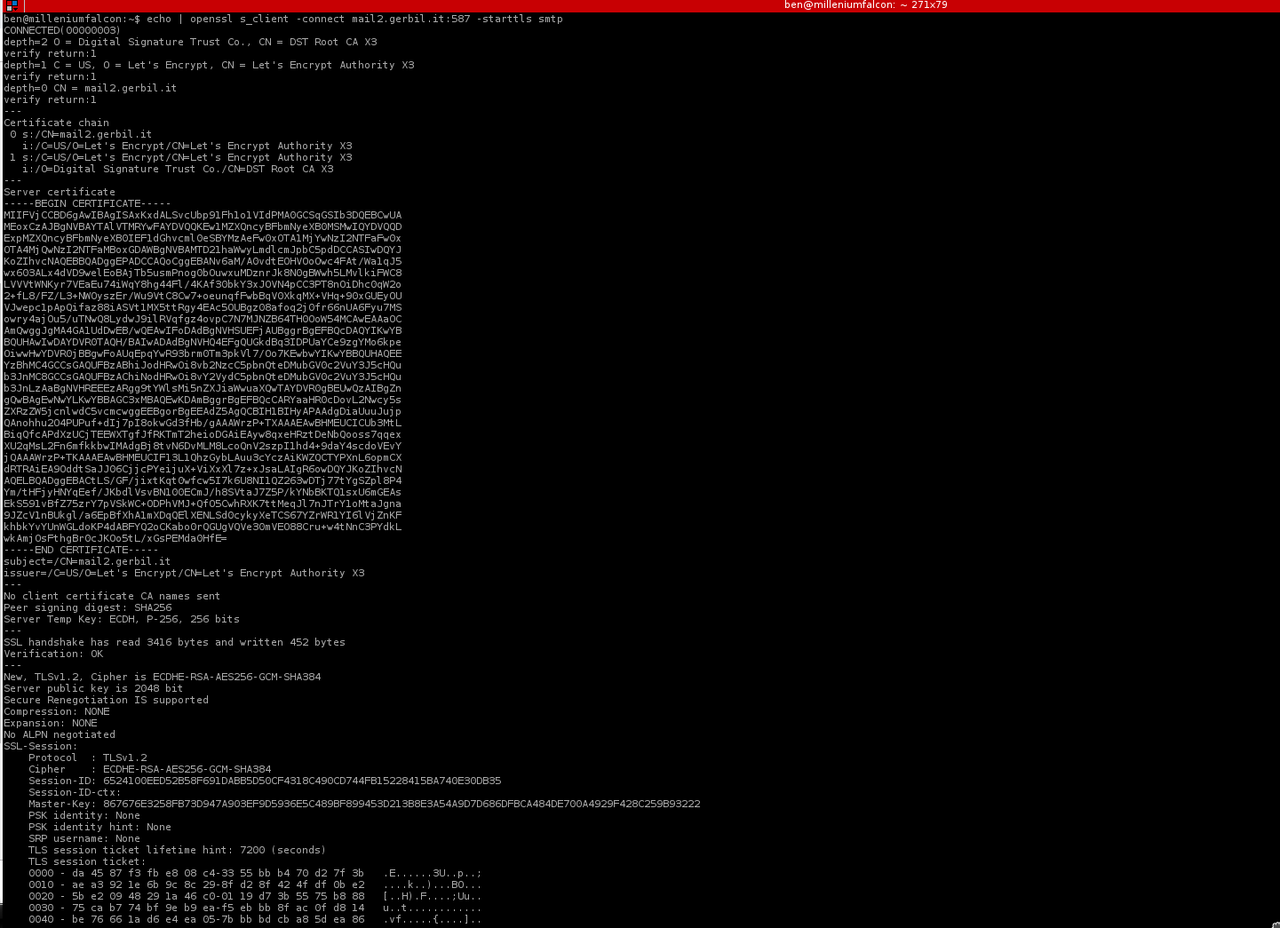 If you look at the output, you'll see some information on the certificate

What you want to check is that the Issuer is Let's Encrypt, and the Subject matches your mailserver name.

You may have noticed on that first openssl call that we had to tell the software to use STARTTLS in order to establish a SSL session.

This is because, by default, iRedMail doesn't ship with SMTPS enabled. The documentation notes that this is deliberate because "SMTPS is deprecated, so iRedMail disable it by default".

Whilst it's true that SMTPS is deprecated in favour of STARTTLS, various ISPs have been caught actively stripping the STARTTLS command from their customer's SMTP sessions in order to perform a downgrade-to-plain attack on the connection.

Whether SMTPS is deprecated or not, the trivial ability to perform a downgrade in this manner means SMTPS remains preferable in my book.

Enabling it is fairly straight forward

Then restart postfix, and verify it's listening on port 465

Allow port 465 through the firewall

We now have a fully configured and functioning mail server, but it won't currently receive any mail because we either don't have an MX record configured, or (as in my case) it's still pointing at the old server.

So, our MX record needs to point to the name of our server (so that the cert is considered valid)

Once that's live (and TTLs have expired), mail should start coming into your server

You should also create or update your Sender Policy Framework (SPF) records.

Apart from the exclusion of SMTPS (which, to be fair, is well rationalised in their documentation) and an utterly insane step in their LetsEncrypt guide, the installation seems to be reasonably sound by default.

I am a little concerned about the iRedAdmin interface - not only am I running an older version (because of support for Debian oldstable being dropped), but the installer also installs PHP 5.6 which is technically EOL (although Debian do backport security fixes, so it's not quite as severe as it sounds).

That said, because I have an admin network available, I do have the advantage of being able to segregate that interface away from the network.

Time will tell what iRedMail is like for ongoing maintenance (installing upgrades does look like it might be a pain), but given it's underpinned by software that I was already using (Postfix, Dovecot) it shouldn't be the end of the world if (as an extreme) I find that the server needs to have the iRed* bits of it removed.

Greylisting is a technique used to deter spam by slightly delaying mail from domains/servers that haven't been seen before. The general principle is that our mailserver will reject mail from "new" servers for an hour.

Sending mailservers that are compatible with RFC 821 will retry later and the mail will be accepted, whereas most spam bots won't bother retrying and the spam won't be received.

The problem with greylisting, like all anti-spam defences, is it does mean there's a risk of "real" mail getting lost (or, at the very least, delayed). With this mailserver, I place more priority on ensuring mail is actually received, so decided to disable greylisting:

However, there is an alternative to this, which is to switch the greylisting plugin into training mode (so that it'll sit and learn about servers you commonly hear from, without actually rejecting anything)

You can then periodically check which domains it knows about using the greylisting admin plugin. Details on how to use it are here.

My old mailserver uses MBox format storage, whereas iRedMail uses Maildir, so in order to import my mailboxes I first needed to configure them.

On a Ubuntu desktop, I copied the Mbox down from my old server and then did

At which point, the original mail appeared in the user's inbox

I make fairly heavy use of mailbox aliases - i.e. so foobarsed@example.com gets delivered into my actual inbox

IRedAdmin pro exposes a form to allow you to create these, but with prices starting at $499/year that's way, way out of my price range

Instead, we just need to make a simple script to create the aliases for us (I saved as /root/add_alias.sh)

Make it executable, and then add an alias