Are you getting what your pay for? How to detect ISP Packet Shaping

We all pay our Internet Service Providers a monthly fee to access the internet, and we all (quite rightly) expect to get the maximum speed achievable on our line. Some ISP's don't like to play fair, however, and shape (also known as throttling) certain types of Internet Traffic.

So how can we tell if our connection is being shaped?

There's a useful set of tools at Measurement Lab. They'll allow you to run diagnostics on your connection, check for throttling and to check which route your packets are taking. In this post, I'll be talking you through the process of checking whether you are getting what you pay for, whether your ISP is shaping your connection and whether there are any faults on your connection.

Note: Test results will be affected by internet access by anything you have on your network. If someone is using VoIP then the results will appear far worse than they would otherwise be.

To begin with, let's run the Network Diagnostic Test, this'll tell us whether there are any obvious faults on the route between our PC and the Measurement Labs server. Access the test here.

So my connection is reporting congestion and a speed of 2.27Mb/s. The system is reporting packet queueing because the server was generating information faster than it could send it to my connection (which will, in part, be due to the congestion). It's a peak time of the day, but I should still be getting more than 2 Megabits Downstream (it was just over 6 a month ago), which suggests either shaping or that BT have completely f*cked the Contention Ratio (the number of subscribers per line).

The Glasnost Test allows you to check whether certain applications and protocols are blocked. Each test can take a while, but returns a pretty comprehensive report. When running a HTTP test, be sure not to browse the web whilst waiting, the test will fail citing excessive noise!

I've heard rumours that BT have started throttling Flash Video, so I'm very interested to see if this is true.

Choose the test most relevant to the problems you are experiencing (or of course, run the all one-by-one!).  Each test takes about 8 minutes to run, and for best results you should try to avoid using your Internet connection whilst you wait.

The test returned a false for signs of packet shaping for flash (and HTTP), although this doesn't mean BT don't do it. Simply that it's not happening on my line at the moment (and if they've any sense, never will!!) The test for Bittorrent shaping on the other hand;

Naughty, naughty BT! I don't actually use Bittorrent so this won't affect me, but it's the principle of the matter. I pay British Telecom to provide Internet Access at a reasonable speed, not to throttle certain connection types to 30 Kbps!! Given that they can't be trusted not to interfere with traffic (some throttling, some more sinister) what grounds are there for me to trust BT at all?

There's a second test on the site for Traffic Shaping, so we'll skip the others for now and give this a whirl too.

Once that's done, give it a run and see what results you get 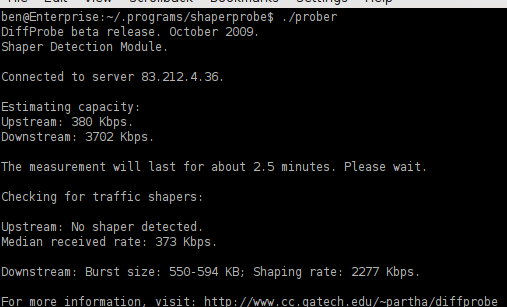 So we detected no shaping upstream, but there does appear to be some downstream shaping going on. Again - Naughty BT!!!!

This test allows you to check how much bandwidth is available before your connection reports congestion. Once again it needs to be downloaded and installed, there are Windows, Linux and Mac versions available.

The output of the program is quite long, but the main focus is the Results section. As you can see from the image above, my bandwidth is pretty terrible at the moment!

The NPAD test checks for the most common causes of speed related problems, these are often in the so-called 'last mile' section of the network. You can access it here.

I chose to leave the default settings on the test, but if you'd prefer different settings, the site has a good description of what they are for.

Rather worryingly most of my NPAD tests failed because the Round Trip Time was too high, the NPAD server is in London so that simply shouldn't happen. I re-ran the test having altered the max RTT to 40 and the Target speed to 7 (Just over what BT promised me), and got another failure. I progressively reduced the target speed and increased the RTT but tests continued to fail.

The issue is that my line has an excessive loss rate (0.008702%). It means that my speed is partially hampered by having to re-send lost packets. This could be an issue with the phone line, my router or the cabling between router and phone socket. It could also be a sign of a failing/faulty ADSL adaptor.

BT do throttle certain types of traffic, and although it doesn't affect me I can't say that I'm particularly happy about it. I pay BT quite a lot each month and should be able to use the bandwidth however I see fit. If they're not charging enough for bandwidth then they need to increase their prices, not start crippling connections.

That said, other ISP's are far far worse, so I've probably got off quite lightly, I do need to troubleshoot my connection though. I don't think it's anything inside the house, so the fault will probably need reporting to BT as a line fault.