What Do I Mean by Embed

The social media companies much prefer it when you use their embed functionality to display SM posts elsewhere. That is, rather than copy/pasting the tweet (or screenshotting it), you write something like the following into the markup of your page

This will result in readers seeing something like this: 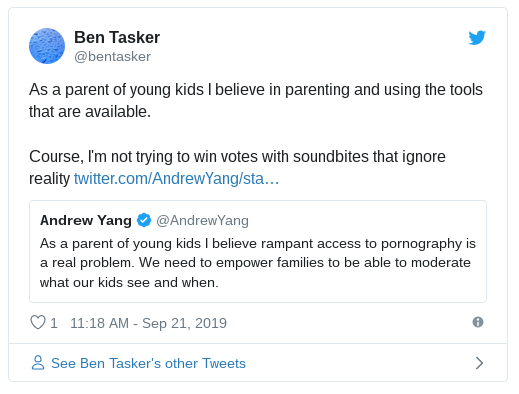 It presents really nicely, and in many ways can add to an article quite well.

So, what's the problem?

I'll open this section by noting that Twitter - in particular - have got much better in this respect, though the underlying concern isn't entirely gone.

Although the embed code now includes the wording from the tweet (it didn't previously), you're still relying on a third party continuing to either support embedding, or (in the worst cases) exist in order to have the content shown in the way, and context you wanted it to.

The problem is, when Twitter goes away, what happens then? True, they may not vanish entirely and might instead continue on as a shadow of their former self. Even then there's risk - Myspace lost all data older than 2016 in a botched server migration.

Whatever the cause, if Twitter goes away, then you're left with just the text in the <blockquote> portion. For a lot of tweets, that won't matter too much, but in the tweet above I'm quoting someone else. That's a pretty important piece of context that will no longer be available, but can entirely change the way a post is read.

The loss of that context can occur even without Twitter suddenly disappearing: 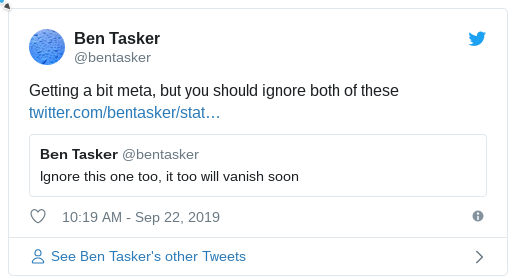 It's a bit of a contrived tweet, but it's fairly obvious here that "both of these" refers to the quoted tweet. If I'd tweeted "everything here is a lie", you'd understand exactly what was a lie.

But, what happens if the person being quoted didn't like being called out on their lie, and so deletes that tweet (or blocks the person quoting them)?

The context is gone.

Now you've lost both the context and the styling that made you embed in the first place.

If it was important to support your post (or even the focus of it) the value of your content has dropped fairly dramatically.

When you embed, you're ultimately relying on a single source - the Social media network - for the content that you're embedding, despite the fact that the user's featured within it have the ability to click "delete".

This may seem unimportant given the silliness of the tweets above, but remember that Tweets are being embedded to add context to stories about the Supreme Court challenge to Boris Johnson's Prorogation of Parliament, with commentators such as Joshua Rozenberg having tweets embedded left right and centre.

Whatever the judgement in that case, the events we're witnessing at the moment are going to become part of our consitutional history, and as a result are quite likely to be something of a historical curiosity in future. There are various bits of analysis and commentary that are at risk as a result of simply embedding tweets rather than actively preserving them.

Some may consider this an unimportant factor, but if you're publishing content then you're presumably hoping for quite a number of eyeballs to look at it.

When you embed a tweet, each and every one of those views will mean that the user's browser has had to contact the relevant social media network. And what do social media companies like to do? Track everyone as much as they can.

By embedding tweets, you're allowing a third party to track your visitors without those visitor's consent. Twitter now know that that user has visited your site.

In fact, if you dig down into the technical details a little more, it's worse than that. Twitter are deliberately collecting information on the site.

Let's say that you want to protect your user's privacy a bit, so you add a referrer-policy header or meta-tag to your site - preventing visitor browsers from including a Referer header when contacting twitter.

It makes absolutely no difference, because the Javascript they embed deliberately sends the information back in the query string:

That's just the initial loading stages too, later in the process they POST themselves a lot more 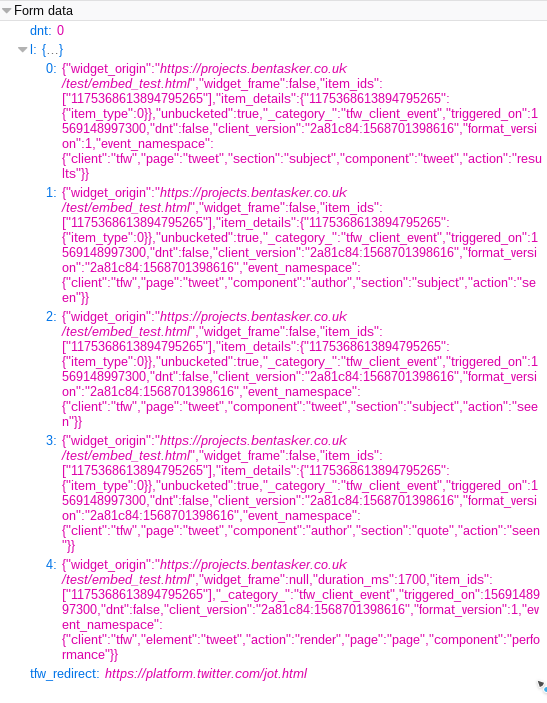 They've got a bunch of javascript events attached too to submit more information based on what your visitors do around that tweet.

This is all information that's being aggregated in the background, and your visitors don't really get a say in it. Those that decide they want to prevent this, and (like me) use an adblocker to prevent the embeds from loading are taken back to the issues described above.

There's a complete loss of context. If you visit the tweet itself, the user's quoted one of their earlier tweets and their comment is in relation to that

That example is taken from a page titled "15 tweets everyone should've read this week", and the majority of the tweets on the page rely on some context - a quote or an image - that isn't visible when the embed fails. As a result, that page, rather than being a (potentially) funny read is a waste of time.

If you're serving content to Europeans, then this could present a real risk to you under GDPR. It's already been found by the European Court of Justice that Facebook's "Like" button is problematic, and that website owners who embed it can be held liable for Facebook's processing of data as a result of a button being embedded.

Although an embedded tweet offers a little more value to the user than an embedded "like" button, the principle remains that both could just as easily just be an image served from your server instead.

By embedding, you're also building in a hook out to 3rd party javascript which may, or may not, be safe at any given point. Social media companies get compromised too, and you'll notice that the embed code I posted above doesn't make use of any safety features like SubResource Integrity (SRI) checks - because the SM networks want to be able to update the code you're pulling in.

Of course, far off in the distant future, twitter.com might not even be owned by Twitter any more - meaning the new owner of that domain can inject whatever javascript they want into your pages.

Alternatively, it may not be that far in the distant future, and instead might be a government poisoning DNS so that they can serve up modified tracking code as broadly as possible - the SSL cert may only be viewed as a hurdle by some governments. I've not heard of any instances of (say) platform.twitter.com being targetted by DNS poisoning in this manner, but it'd certainly make a juicy target.

Even if you're feeling slightly dubious about the severity of the claims above, the reality is that they're all trivially avoidable.

Simply screenshot the post (as I've done above) instead, and include some/all of the post in the image's alt attribute. You can even link it out to the tweet if you desire

That way, the text is still indexed by search engines, the context within the tweet/post can never be lost from your content, and visitors to your page don't wind up sending a ping into the data-hungry social media networks.

Obviously, what I've laid out here cannot apply to all content - you've little choice but to embed a Youtube video, for example.

For text and static image posts though, using SM embeds really does seem like an incredibly short-sighted, even potentially harmful, move.

Given that you included the tweet in your content, you obviously felt that it provided important context. Yet, by embedding you've inserted a reliance on a single-point of failure, leaving yourself open to the risk that that context could easily be removed.

Even if you feel the tweet doesn'tr really add much value, what's the cost of a visitor getting frustrated at the broken tweets and wandering off to try and find a less broken source, rather than exploring your other content?

For a subset of your visitors, that desirable context will already have been removed - either because the user blocks Twitter (for privacy reasons), or because they're on a network where the admin have blocked it "for" them. That "admin" may very well be an oppressive government.

For those visitors who don't have Twitter blocked, you've also exposed your their browsing habits to the social media networks, whilst increasing the possibility that malicious code will be run in their browser.

And all this, for what? In the vast majority of cases, you've gained nothing compared to hitting "Print Screen" on your keyboard.

Personally, I'd argue that if we care about the content we're writing, then we should also care about ensuring that the context in which it's written is preserved.

That's far too important a task to trust to a bunch of unknown third-parties, so even if you're not that bothered about your visitors' privacy, you should be using screenshots instead of embed code. If the cost/benefit of that seems too high, what was the perceived benefit in including the tweet in the first place?