The aim was to look solely at search terms used - no relevance is given to whether the term returns any results.

For each category (see below) a regex was built containing the relevant terms, this was simply used to egrep against lists containing all search terms recorded in the last 12 months.

One list refers to searches received via the hidden service, the other via the Clearnet CDN.

By going over the logs a few times, I sorted search terms into various categories (and in some cases, subcategories). The naming of these categories is fairly arbitrary, but terms were divided into

In the stats/graphs below, I generally only refer to the top level categories unless there's something interesting about the distribution of their subcomponents.

Hopefully most categories are fairly self explanatory, but some probably deserve some extra notes

When putting keywords into this category, I've given this a fairly broad brush though - if you're searching for bikini on this site, I think it's reasonable to assume you're not hoping to find my take on whether bikini's will become bluetooth enabled.

Some of the terms seen are almost certainly driven by my Photography section, but as the related images would all fall under the NSFW tag, I've considered those NSFW too. The vast majority though, are not.

I've written in the past about Drug Policy, as well as specifically about medicinal cannabis, so it was expected there may be some search terms which fall under this category.

Whilst there are some searches, it seems none relate to that content, with the highlights instead being searches like how to make GHB and how to rise PH in meth.

The category Fucked up searches encompasses searches for content that is, and should be, illegal.

Seriously, if you're going to random sites and searching for terms like loli seek help now before you ruin an innocent life.

I won't detail the search terms used for this category: not only do I not want to match against them in Google, but I've no intention of giving anyone ideas to search elsewhere. Again, if you're searching for this kind of content - seek professional help.

Place names basically - I was surprised to find them in there (beyond a few obvious examples). Some of the locations searched related to districts within cities, so having spotted these I was curious to see whether they were being searched by Tor users (potentially giving away information about their own location), or via clearnet (in which case we could probably tell anyway).

This category is almost certainly under-represented, as I run a Web Application Firewall (WAF) with quite restrictive settings on the edge. The stats for this category represent the few that made it past that WAF before the backend's WAF (hopefully) blocked them.

Although not always successful, I try to avoid making political posts on this site. However, political content is sometimes being searched for.

And so start the graphs

It probably makes most sense to start looking at searches in aggregate (i.e. Tor and Clearnet) combined to get an idea of how searches are distributed. 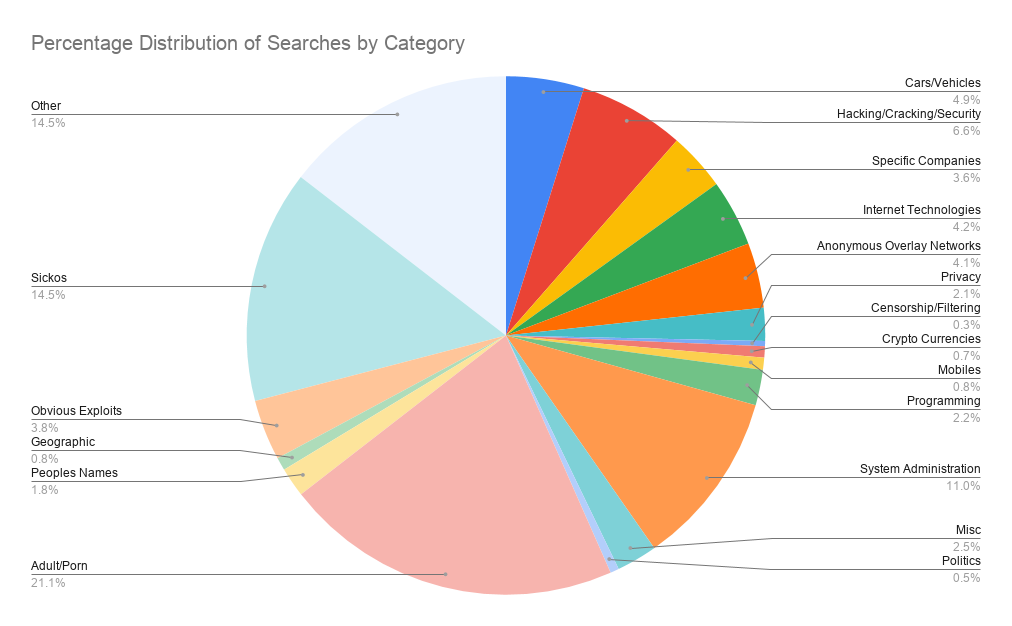 Clearly, the Adult category is extremely well represented in searches. Unfortunately, so is Fucked Up (Sickos) 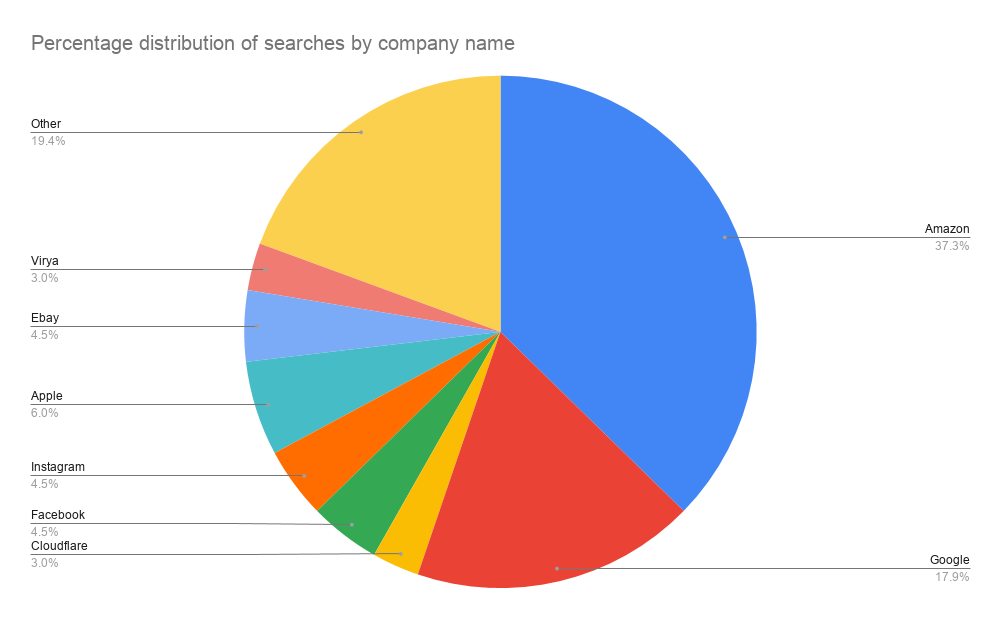 The vast, vast majority of searches are for Amazon or Google. There's probably an element of bias there, though in that I've probably written about Amazon and Google more than most of the others - my site probably doesn't attract Apple fans as frequently (because I've posted about Apple's services less frequently).

I suspect that Virya (a company most won't have heard of) makes the cut here, because I used to work for Virya Technologies some years ago. 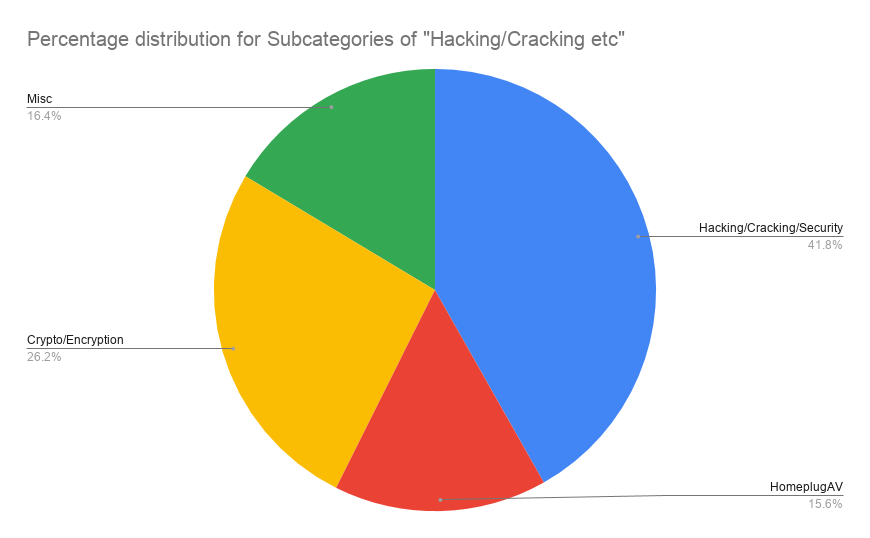 We can see that the majority of searches within the category Hacking/Cracking relate to vulnerability exploitation rather than to (tangentially) related technologies.

Bad news for advertisers, the majority of users searching for Privacy related terms were searching for those categorised as being about adblocking 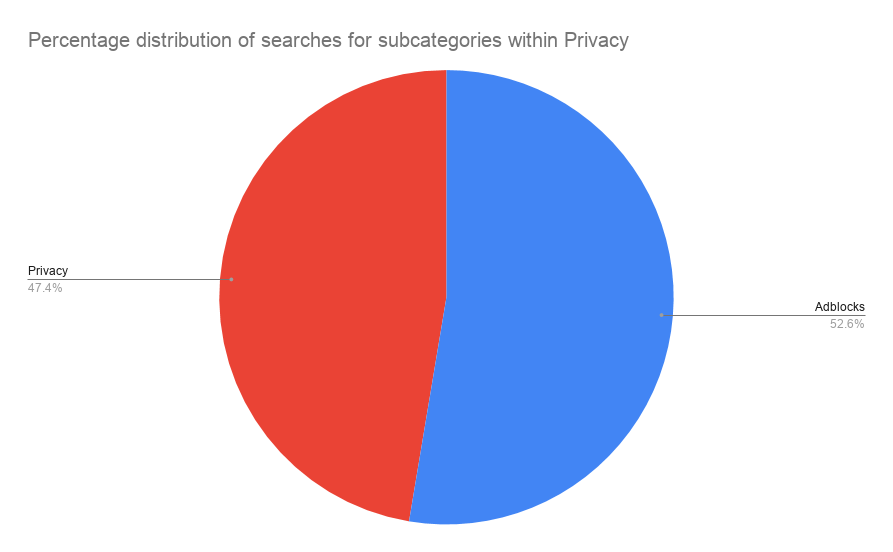 The majority of searches within the Misc category related to people trying to find information about me, my sites, or downloads that I offer 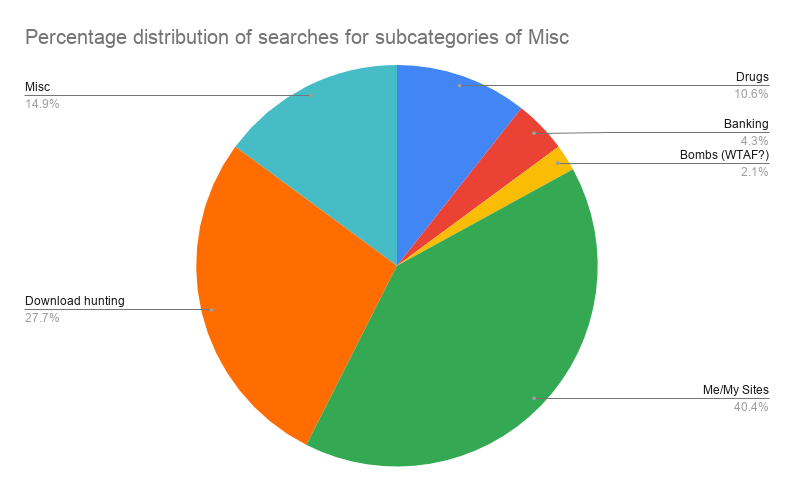 A staggering 2.1% was searches for the term bomb. I... I have no words for that. Nearly 15% of searches were either looking for information to improve their drug making or to blow shit up (maybe, like in Breaking Bad, some want to do both?).

Although there is some bias towards searches from the clearnet (world wide web), the two sources aren't that far off being equal in distribution 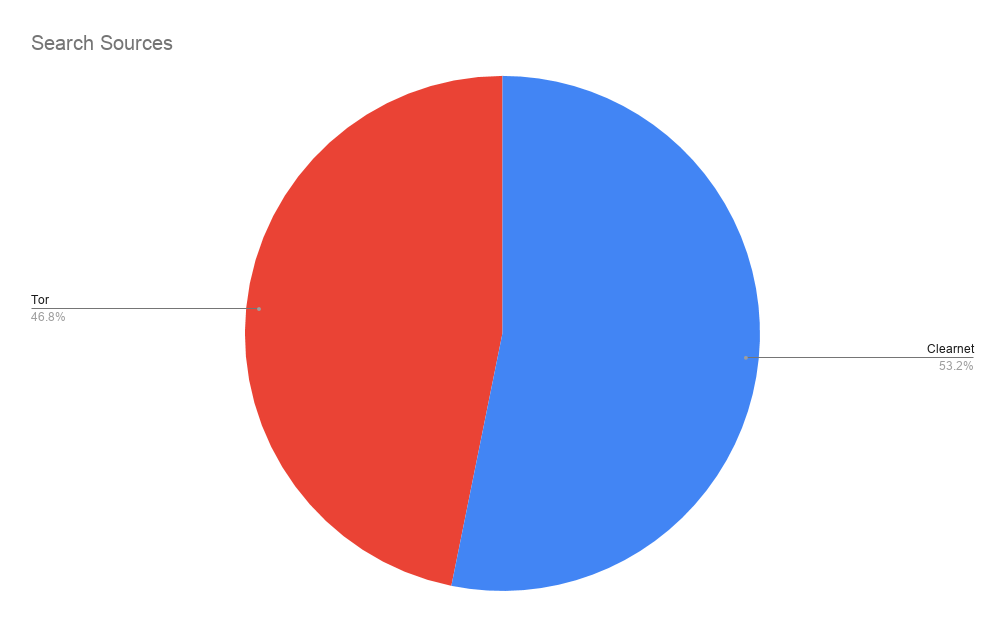 Rather than generating comparative pie charts for each category, I decided instead to create column charts showing the percentage of searches that came from Tor for that category (i.e. the Clearnet %age is whatever's left to reach 100) 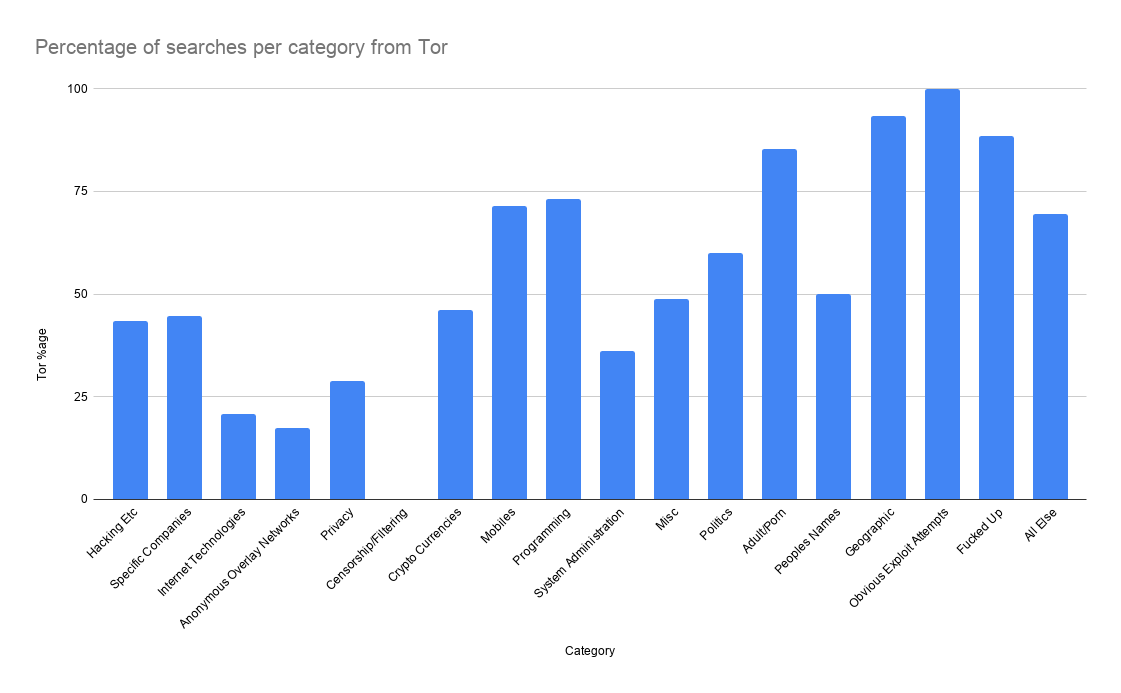 So, most of those initial expectations were wrong 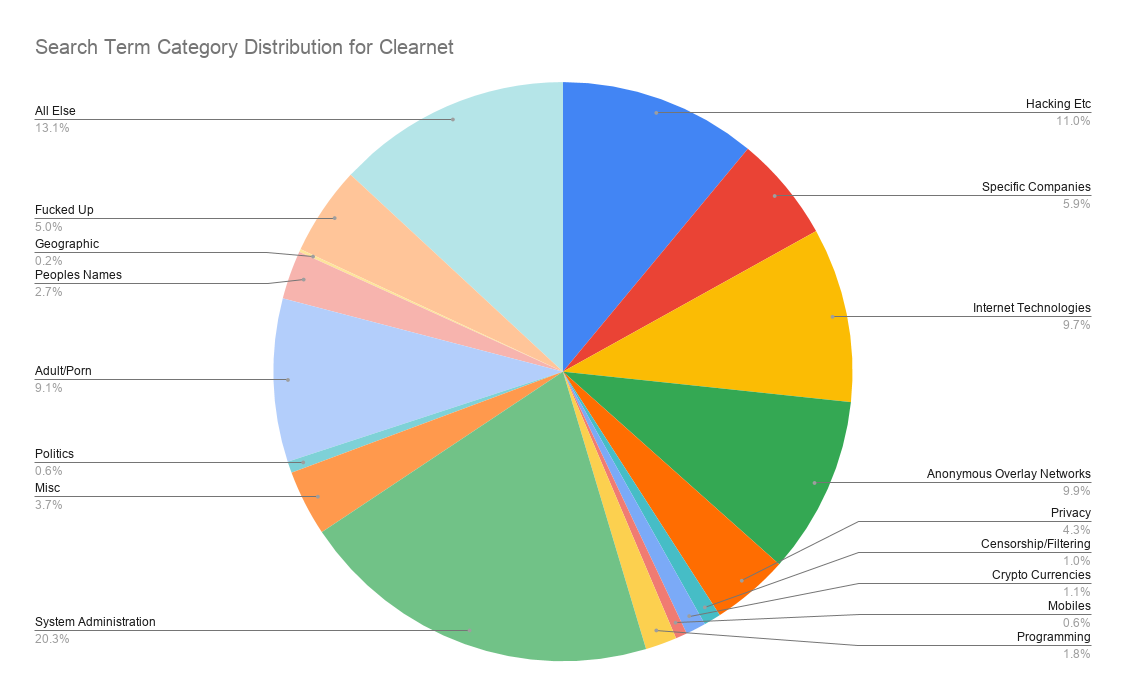 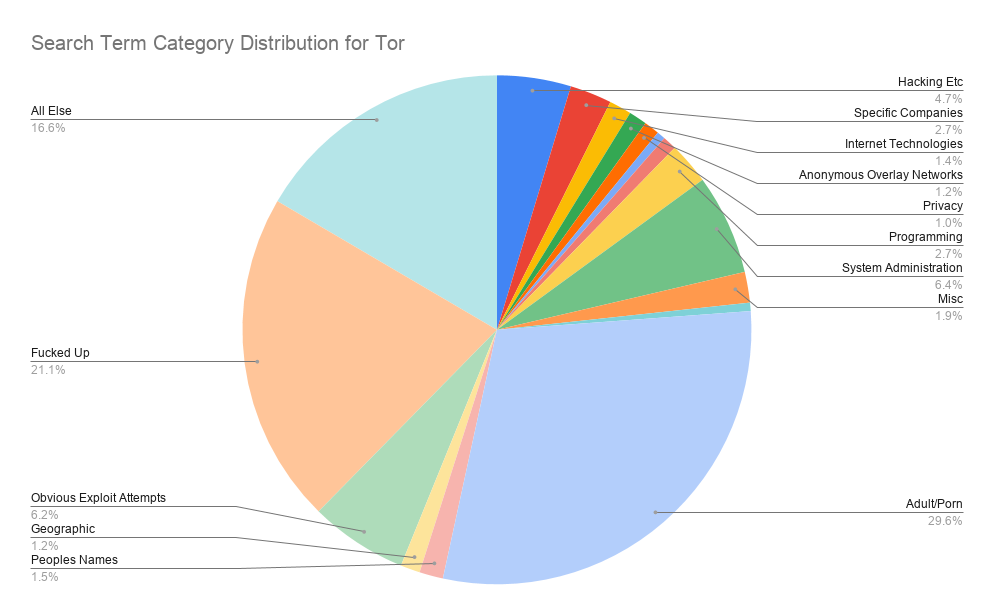 We can see, then that Fucked Up accounts for a disturbing proportion (5%) of clearnet searches. These are people who are connecting out, over the open internet, to a random site and then searching for Child Sexual Abuse material.

Because the percentage was so much higher than expected, I ran a quick grep over the raw logs to check the terms (in case the stat collection had made some false positives), but unfortunately not, they genuinely all are pedo terms.

It'd probably be remiss of me not to note some of the more surprising terms that were observed in the logs. I've already mentioned (a couple of times) that people seem to view me as a potential source of bomb making tips.

Unsurprisingly, as we've seen, some of the terms were people searching for the unforgiveable.

I think more or less everyone in tech gets emails along the lines of "can you help me hack a facebook account", so it comes as no surprise to find similar searches in the resultset.

I guess, ultimately, people see a search box and type whatever they want into it - it's just not really clear how you end up on my site in the first place if you're looking for Cocteau Twins.

The first thing that really stands out in all of this is how the traffic is distributed across the two sources in comparison to expectations.

It would have been reasonable to assume that as Tor users have more anonymity and privacy, as a group they'll be both more privacy and censorship focused, and more likely to "exploit" that anonymity.

This seems to actually only be partly true.

Queries relating to (sometimes quite granular) geographic locations were observed in the logs - the majority of them came from Tor users. This carries the implications that users may complacently be putting details of their location into unknown sites.

As surprising as it might have been to find people searching for bomb making instructions, it's probably less surprising that every one of these queries was received via Tor.

Users on the traditional world wide web were more likely to search for information relating to System Administration than anything else. This makes sense in many ways, considering that the majority of posts on this site probably related to systems management in one way or another.

Where more extreme searches (such as category Fucked Up) are made, it's clear that the source is statistically more likely to be a Tor user.

But, it's also clear that the clearnet has it's own share of problematic users, with some truly disturbing search terms being received through that channel.

However, it's also extremely clear that objectionable content is not the sole purpose for which Tor is used, with the vast majority of searches relating to much more acceptable content.

To use an analogy - you don't have to be racist to have voted for Brexit, but if you are racist then you probably did vote Leave as only a minority of racists voted Remain.

I must admit, though, to a certain temptation to redirect the results page for some of those terms to https://fbi.gov